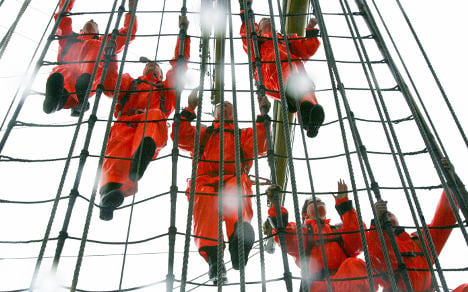 Sara Lena Seele, whose death in late November set off what has been called a “mutiny,” was overweight and should not have been ordered to participate in the climbing exercise on the mast, according to a navy investigative report cited by daily Bild.

The report said that Seele’s height-weight proportion – she was 1.58 meters and weighed 85 kilos (5’2”, 187 lbs.) – should have excluded her from strenuous duty on board ship. Why the cadet’s massive weight gain before her transfer to the Gorch Fock was not taken into consideration by her superiors is also being investigated.

Chief prosecutor Birgit Hess from the Kiel prosecutors’ office confirmed to the DPA news agency that Seele’s fitness for duty was now a part of its investigation and that it was in close contact with the Defence Ministry. The navy’s press office refused to comment on the matter.

The Gorch Fock, a tall ship that was once the pride of the German navy, has been the centre of allegations of bullying, sexual harassment and the all-around bad behaviour of its officers, who reportedly spent much of their time on the ship sunbathing and partying.

The vessel is now on its way back to Germany from South America.