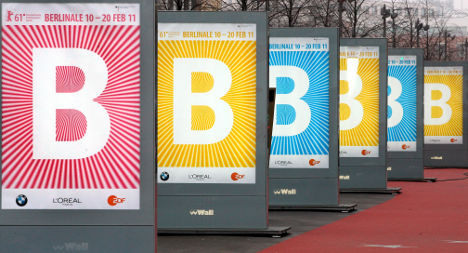 A slimmed-down competition will see 16 films from around the world vying for the Berlinale’s Golden Bear top prize, to be awarded by a jury led by Italian-American actress and director Isabella Rossellini on February 19.

And at the event’s booming European Film Market where rights are traded, out-takes from a new movie made by Madonna are slated for a sneak preview, possibly in the presence of the pop superstar.

The festival will kick off with Joel and Ethan Coen’s re-imagining of the classic Western “True Grit,” a US box-office smash starring Jeff Bridges and Matt Damon that is nominated for 10 Academy Awards.

“Margin Call,” the feature film debut of US director J.C. Chandor starring Spacey, Demi Moore and Jeremy Irons and set at an investment bank at the start of the financial crisis, will launch the competition Friday.

“One of the trends that we tried to set this year was toward younger directors and more young female directors in particular,” festival director Dieter Kosslick, now on his 10th Berlinale, told reporters.

“We also wanted to discover new forms, which is why we opened up the programme to films made in 3D.”

After a rash of Hollywood 3D blockbusters such as “Avatar” and “Toy Story 3,” European auteurs are now discovering the artistic appeal of the format.

“We’ll have to see if art-house 3D, which does not have to rely on special effects as much as blockbuster cinema, can develop its own aesthetic.”

British actor Fiennes, a two-time Oscar nominee, will unveil his first effort from the director’s chair: “Coriolanus,” a retelling of the Shakespeare tragedy about a Roman general who mounts a rebellion against the empire.

Zoe Kravitz, the daughter of rocker Lenny Kravitz and actress Lisa Bonet, stars in US competition entry “Yelling To The Sky” by Victoria Mahoney about a 17-year-old girl fending for herself in a rough New York neighbourhood.

The newcomers will face a challenge from veterans such as Hungarian master Bela Tarr, who will screen “The Turin Horse” about a traumatic episode in the life of German philosopher Friedrich Nietzsche.

And Iranian film-maker Asghar Farhadi, who won a best director prize for his haunting drama “About Elly” at the 2009 festival, will be back with “Nader and Simin, A Separation” about an estranged couple reunited by a surprise event.

Beier of Der Spiegel picked that entry as his most keenly awaited.

Farhadi faced a production ban by Iranian authorities while making the film for comments in support of dissident director Jafar Panahi, whom the festival will honour this year. The ban was later lifted.

Neeson stars in “Unknown”, a German-British-French production set in Berlin about a man who emerges from a coma to discover his identity has been stolen.

Last year’s Golden Bear prize went to Turkish drama “Bal” starring a seven-year-old boy as a struggling pupil who loses his father in a freak accident.