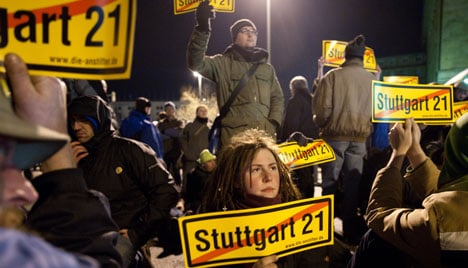 More than 1,000 demonstrators came out in the early hours of the morning to protest the continuation of construction work on the controversial revamp of Stuttgart’s main train station. According to police, around 50 people tried to stop the machines that would be used to transplant the trees.

Police repeatedly broke up groups of demonstrators who had sat in front of the equipment or tried to tear down barriers. According to Matthias von Herrmann, the spokesman for a group opposed to the project, officers used nightsticks.

“Those responsible for Stuttgart 21 have still not understood our criticism of their project,” said Herrmann in a statement. “We shall continue to resist the building operations and protest against them, just as we have over the past weeks and months.”

Some 32,000 members of the Parkschützer group were notified by e-mail or text message at 3:34 am on Tuesday. The group, whose name translates as “park guards,” oppose moving the trees, saying they play an important role in filtering automobile emissions from a busy intersection.

Over the next few days, 16 trees in all are to be transplanted to other locations in Stuttgart in preparation for the construction of an underground building associated with the multi-billion-euro rail project.