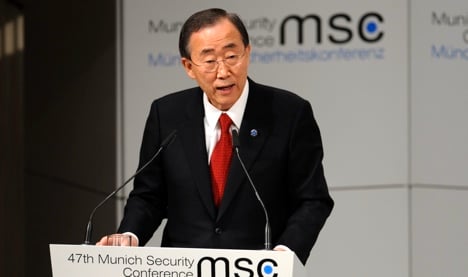 “Egypt has been playing a very strategic role in the Middle East peace process. President (Hosni) Mubarak was one of the key players in trying to facilitate reconciliation,” Ban told reporters in Munich, Germany.

“Overall in the Middle East peace process he has participated and contributed,” he said. “This is what we are concerned about, and that is why we would like to see this transition take place in an orderly and peaceful manner without having any negative sudden impacts on the overall peace and stability in this region.”

In a statement afterwards, the grouping called on all parties “to undertake urgently efforts to expedite Israeli-Palestinian and comprehensive Arab-Israeli peace, which is imperative to avoiding outcomes detrimental to the region.”

“The Quartet meeting took place at a critically important time, considering what has happened in this region. It has serious implications for continuing a peace negotiation process,” Ban said Sunday.

He said it was important that the Quartet had agreed to step up its engagement in order to get the stalled peace process “back on track.”

“We will do our best efforts,” Ban said. He said that the next Quartet talks would likely take place on the sidelines of a Group of Eight (G8) foreign ministers’ meeting, which is due on March 26-27 in Paris.