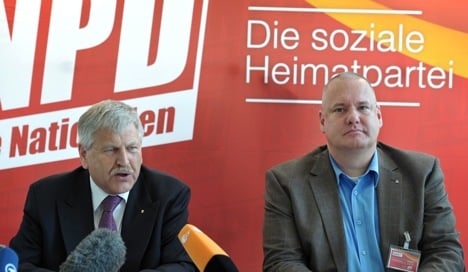 The Hesse branch of the NPD called on its members to sign-up for census-taking duties so they could “draw conclusions about the mental state, the social problems and the political mood” of the people of that state.

Director of Frankfurt’s census office Waltraud Schröpfer said NPD members had now been banned because the law did not allow census data to be used for political reasons.

On the NPD’s website, the party said they would use the data to “lay the foundation of a national-democratic ‘market research’ for the best way to address voters.” The NPD also called on members to donate to the party the expense allowances of between €250 and €1,000 that census interviewers receive.

The NPD has attempted similar census-based campaigns in Saxony and North Rhine-Westphalia in the past.

According to Saturday’s edition of the Frankfurter Rundschau newspaper, the local statistics office in Wiesbaden will try to prevent NPD members from taking the census by giving priority to volunteers who work for public authorities.

Hesse’s census begins on May 9. The state will send out 7,000 interviewers to 12 percent of the population to collect data.