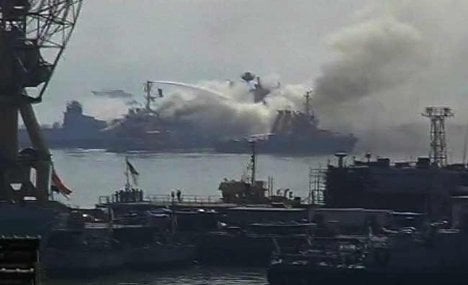 The ocean liner Nordlake, based in Hamburg and managed by the Klaus E. Oldendorff shipping company, crashed into the Indian navy vessel Vindhyagiri in a narrow navigation channel at the entrance to the port of Mumbai on Sunday, Indian broadcaster NDTV reported.

The nearly 400 people on board the Vindhyagiri – including the ship’s crew and their visiting families, who were celebrating Navy Day – were successfully evacuated before a massive fire broke out on the vessel some 12 hours later.

“When the collision happened, there was a hole in the boiler room and that is where the fire started. All the people were evacuated as it was close to the shore.

Unfortunately the fire could not be doused, so the ship has sunk,” deputy police commissioner for the Mumbai port zone, Qaiser Khalid, told NDTV.

The warship, now touching bottom in less than seven metres of water, has 300 tonnes of fuel on board. However, the Mumbai Port Trust says there is little danger of an oil spill, and regular operations at the port have not been affected.

A preliminary investigation found that the Nordlake was exiting the harbour as the Vindhyagiri was navigating its way in. The Nordlake swerved to avoid another ship and subsequently struck the Vindhyagiri, the broadcaster said.

The Indian navy called the sinking of the Vindhyagiri India’s greatest peacetime casualty, noting that a frigate has never been sunk by a civilian vessel.

Built in 1981, the Vindhyagiri suffered extensive damage, but the navy said the ship could possibly be repaired and eventually brought back into service.

The nearly 180-metre-long Nordlake, which flies a Cypriot flag, did not sustain any serious damage. The freighter supports an international crew, and no Germans were on board at the time of the crash.

“We are happy that, to our current understanding, the accident has caused neither environmental harm nor any human casualties,” Peter Rybarczyk, chief executive of the Klaus E. Oldendorff shipping company, told Hamburg broadcaster NDR.

The Director General of Shipping in Mumbai has ordered an inquiry into the collision, NDTV reported, while the navy has also filed a complaint that argues the ship from Cyprus did not follow standard operating procedure.

The captain and crew of the merchant vessel were booked under Indian Penal Code sections 280 (rash navigation of vessel), 337 (causing hurt by act endangering life or personal safety of others) and 427 (mischief causing damage), deputy police commissioner Khalid told NDTV.

The Board of Inquiry is investigating the cause of the crash using video of the moments leading up to the collision, including footage captured by visitors aboard the ship.

The sunken frigate will be lifted from the sea floor, according to NDTV, after which the Board of Inquiry will assess the damage and determine if the Vindhyagiri can be made seaworthy again.