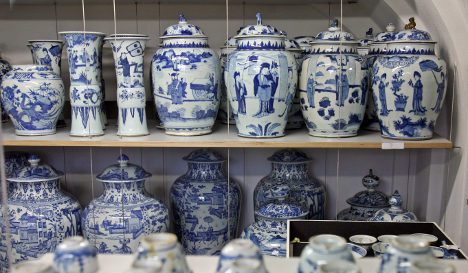 The House of Wettin, a dynasty that ruled Saxony for more than 800 years, was paid the money for a collection of 300 porcelain figures, news magazine Der Spiegel reported.

The claims were led by Prinz Albert von Sachsen and his sister Prinzessin Elmira von Sachsen, who are direct descendants of Augustus II the Strong.

The payment is for precious porcelain items now in state ownership originally belonging to the House of Wettin, which fled during World War II, after which its treasures fell into the hands of the Russian-backed communist state.

“It is important that all the porcelain in question remains in the state,” a spokesman for Saxony’s Finance Ministry said.

The settlement, to which Saxony’s government has already agreed, is likely to have further consequences. The House of Wettin is also making claims on paintings, sculptures, furniture, books and jewellery in the famous Green Vault, which is Europe’s largest treasure collection and was founded by August II the Strong in 1723.

The prince and princess have had previous settlements from the state of Saxony, Der Spiegel reported, including a 1999 deal consisting of 6,000 works of art and property valued at 12.6 million Deutsche Marks, along with a prized piece of land in central Dresden.

In that agreement, there was an extra clause allowing further claims – indeed in any instance in which artworks appear to belong to descendants of August II the Strong. The current deal partly settles the various claims by the family against the state. The parties are supposed to reach a final agreement about all art treasures by 2012.

The House of Wettin can make claims on goods that demonstrably were in their possession between 1924 and 1945 but came into the hands of the state after World War II.

The prince and princess’ lawyer, Gerhard Brand, said the provenance of the porcelain collection was clear: In 1947, a bricked-up basement hiding place was discovered at the Moritzburg Castle, near Dresden, filled with porcelain pieces.

In the same year, it emerged that a priest had hidden from the Russians many Wettin dynasty treasures in a church attic in nearby Reichenberg. The royal family had fled and its private collection was taken by the state.

Over the past year, the Dresden Porcelain Collection was closed for a total of several weeks for a comprehensive inventory on the provenance of the art works it holds. The research cost some €100,000.