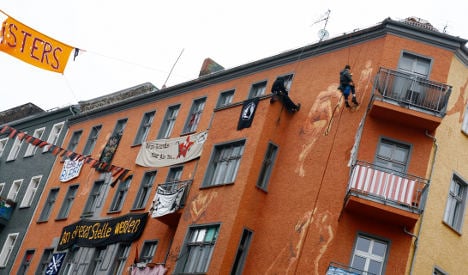 The residents of Liebigstraße 14, in the Friedrichshain district, argue that their eviction, scheduled for 8 am Wednesday, is illegal. They are hoping for a last-ditch ruling against the eviction by a Berlin court on Tuesday.

Four of the residents held a press conference Tuesday morning at the nearby Galiläakirche church to announce that they would be resisting the eviction Wednesday morning. One of the four, who identified herself as Sarah, 24, but declined to give her surname, told The Local that the residents would refuse to hand over the keys and leave the building.

She said they were expecting up to 1,000 police to carry out the eviction on Wednesday. However, she said they would not violently resist.

“It’s an awful situation to be in,” said Sarah, a PhD philosophy student. “Anyone would be scared. The state has a monopoly on the legitimate use of violence so if it comes to a face-to-face confrontation with police, we’d be pretty stupid to fight back.”

On Saturday, a demonstration by left-wing activists against the eviction ended with 40 police injured, according to various news reports. Sarah rejected criticism of the residents’ supporters’ actions, saying that they were taking legitimate action against gentrification.

“People keep asking us about violence by our supporters, but for us the real violence is the violence of eviction and of the gentrification happening every day,” she said. “People’s anger is legitimate and understandable. When you feel like your voice is not heard … it is understandable that people use direct action.”

She refused to say whether this would include blockading or trying to prevent development of the building once it begins.

“We will be fighting this eviction to the end and past the end,” Sarah said. “And it’s not just us; we have an incredible number of supporters not just in other housing collectives but all the people in Berlin who have had enough of rising rents and watching gentrification rampaging through the city, helped by the Berlin government pursuing an aggressive agenda.”

Unusually, the well-attended press conference was filmed and photographed only from the rear so that the four residents’ faces could not be seen.

Friedrichshain is one of the key flashpoints in the battle over the gentrification of Berlin, which pits property developers and investors against mostly left-wing residents. Liebigstraße 14 has been occupied as a squat – and later as a housing project with a legal rental contract – since 1990 after the Berlin Wall fell. However the building was bought from the city by private owners in 1999.

The residents say they had a lease until it was cancelled in 2007. After two years of legal wrangling, they were given an eviction order in November 2009. They have been fighting this and subsequent orders until now.

The 25 current residents are a mix of Germans and foreigners, and of workers, students and artists, said resident Susann, 29, who works as a joiner. She said the eviction was illegal because the notice served was out of date and applied to previous residents of the house. The make-up of the building was “pretty stable,” she said, with most of the residents having been there for some years.

She said a Berlin court would readdress the matter on Tuesday, and that the a decision against the eviction could still be made.