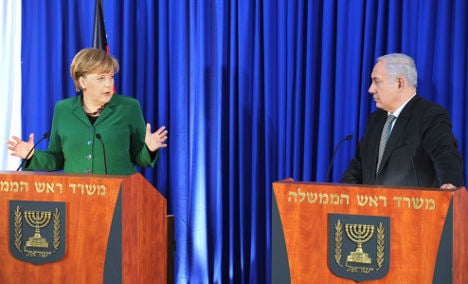 Late on Monday at a joint press conference with Netanyahu on the first day of a visit that included a joint German Israeli cabinet meeting, she spoke of “troubled times” against a backdrop of civil revolt in Egypt and Tunisia.

“Because of that,” she said, “It is even more important to get on with the peace process.”

Arriving in Israel on Monday afternoon she went straight into a meeting with Netanyahu, which a source close to the German government said focused on the crucial need to advance Israeli-Palestinian peace negotiations in light of the unrest shaking Egypt.

Her visit comes as the Egyptian government struggles to contain widespread civil unrest. Egypt has a long and partly unfenced border with Israel.

Central to Monday’s talks was the potential fallout from the events in Egypt, with both sides describing the situation as “very difficult,” the German source said.

Merkel told Netanyahu that what was happening in Egypt “made it even more necessary for Israel to be more constructive in the discussions on the peace process,” he said, adding that both parties agreed that “concrete steps should be taken within the coming six months.”

Netanyahu said that while radical Islam was not the root cause of Egypt’s troubles, history showed that civil disturbance could by exploited by Islamist groups.

“In a time of chaos, an organised Islamic group can take over the state. It happened in Iran and it also happened in other places,” he said at the press conference.

Merkel said that under the circumstances a continued deadlock in Israel-Palestinian talks was not viable.

“In the next days, it will be even more important to act wisely, especially regarding the peace talks,” she said. “Negotiations have to be restarted as soon as possible. Standing still is not a rational option.”

Direct talks between Israel and the Palestinians broke down late last year in a row over Jewish settlement building.

Immediately after their meeting, Merkel and Netanyahu hosted a joint session of the German and Israeli cabinets at Netanyahu’s office.

“We are allies, Israel and Germany, and we have a great desire, on both sides, to strengthen our relationship and our bilateral cooperation,” Netanyahu said at the start, according to his office.

The two sides later held an official dinner at a Jerusalem hotel.

Merkel’s delegation includes 10 ministers representing half of her government.

The two sides signed a number of bilateral agreements dealing with crime and terrorism, as well as cooperation on climate change and renewable energy.

On Tuesday, Merkel is to meet Israeli President Shimon Peres and opposition leader Tzipi Livni, then goes to Tel Aviv to address a security conference.

During her 2008 visit, Merkel gave a landmark address to the parliament on the 60th anniversary of the founding of the Jewish state in the wake of the Holocaust.