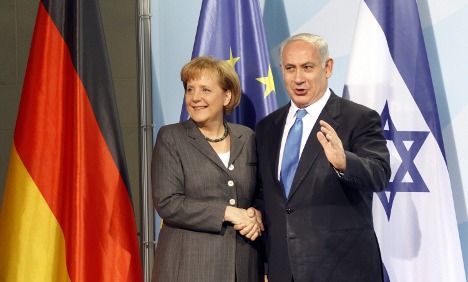 Upon landing at Tel Aviv airport, Merkel headed straight to Netanyahu’s office for talks due to focus on the Middle East peace process and an upcoming Quartet meeting in Munich, a source close to the German government said.

Her visit came against the backdrop of popular unrest in Egypt, which together with Jordan is the only Arab state in the Middle East that has diplomatic relations with Israel.

Merkel, who last visited Israel in 2008, is keen for some movement in Middle East peace negotiations over the next six months, the source said.

Direct talks between Israel and the Palestinians broke down late last year in a row over Jewish settlement building.

“From the chancellor’s point of view, the current phase of stagnation is extremely unsatisfactory,” the source said. “She said it is very important that it moves in the next six months.”

Merkel was expected to push for fresh talks with a focus on borders and security. She was also to clearly reiterate Germany’s opposition to Israel’s ongoing settlement policy.

“According to the chancellor, the settlement policy is still an obstacle to the establishment of the two-state solution as called for by the international community,” the source said.

Merkel was also to raise the issue of the possible consequences of political change in Lebanon, as well as Israel’s view on the developments in Egypt, he said. Iran would also be on the agenda.

Immediately after their talks, Merkel and Netanyahu were to host a joint meeting of the German and Israeli cabinets at Netanyahu’s office, to be followed dinner at a Jerusalem hotel.

Merkel’s delegation includes 10 ministers representing half of her government.

The two sides were expected to ink a number of bilateral agreements dealing with crime and terrorism, as well as cooperation on climate change and renewable energy, sources on both sides said.

On Tuesday, Merkel is to meet Israeli President Shimon Peres and opposition leader Tzipi Livni, then go to Tel Aviv to address a security conference.

During her 2008 visit, Merkel gave a landmark address to the parliament on the 60th anniversary of the founding of the Jewish state in the wake of the Holocaust.