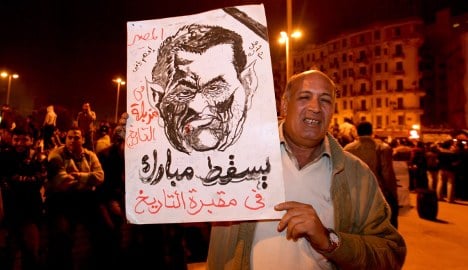 The news came as other politicians from her centre-right coalition warned that Egypt could be sliding towards Islamist rule.

Merkel called for guarantees for the freedom to demonstrate and freedom of information as the two leaders discussed the crisis in detail, said spokesman Steffen Seibert in a statement.

“She once more urged the Egyptian security forces not to use violence on the demonstrators,” he said.

She made clear that she expected the new government appointed by Mubarak this weekend to go through with the political and economic reforms he had announced.

Merkel had told Mubarak it was “indispensable to hold a dialogue with the population, particularly with the youth, and to meet their legitimate demand,” Seibert added.

On Monday, daily Bild quoted coalition foreign policy experts saying that Egypt was in danger of drifting into a regime dominated by the Muslim Brotherhood and other Islamic political groups.

“At the moment it’s altogether unclear what the opposition in Egypt actually stands for,” said Philipp Mißfelder, foreign affairs spokesman for Merkel’s Christian Democratic Union parliamentary wing. “It is questionable whether the Muslim Brotherhood or other Islamists aren’t profiting from the protests – and steering the country in a different direction to that which we are hoping.”

The parliamentary spokesman for foreign affairs for the pro-business Free Democratic Union, Bijan Djir-Sarai, told Bild: “I fear that fundamentalist powers are exploiting the situation. They could drive Egypt in the wrong direction.”

He compared the situation to that of Iran in 1979, when an Islamic revolution overthrew the pro-western Shah and installed the regime that still governs today.

“The German government is on the side of those who are calling for democracy and human rights,” his ministry quoted him as saying. “We do not yet know how political developments will unfold in Egypt. But one thing is clear, nothing will ever be the same as before,” he added.

The protests in Egypt came “from the heart of society, particularly the younger generation and the middle class”, he noted, and and must “for this reason be taken seriously.”

The anti-government uprising raged for a sixth straight day in Egypt Sunday amid increasing lawlessness and mass jail breaks, with a death toll estimated at 125.

The three leaders called on Mubarak to commit to change in response to what they said were the “legitimate grievances” of his people.