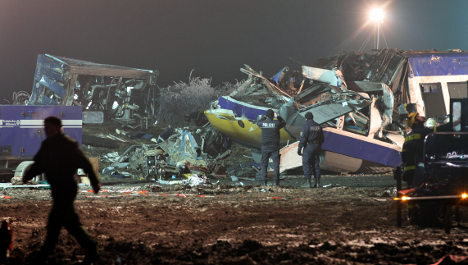 The driver was suspected of negligently causing deaths and injuries, and endangering rail traffic, the state prosecutors and police in Saxony-Anhalt said Monday in a joint statement.

Ten people were killed and 23 people injured, many seriously, in the collision late Saturday night between a regional passenger train on the HarzElbeExpress (HEX) service and a freight train at Hordorf, on a sing-track section between Magdeburg and Halberstadt in the state of Saxony-Anhalt.

Eight of the people killed in the crash still had not been identified by midday Monday, investigators said.

Their efforts came as the rail commuters’ lobby group, Pro Bahn, warned that basic safety mechanisms that were the standard in western Germany were still lacking in parts of former East Germany.

“It must be made clear whether and where there are fundamental safety flaws, especially on lines with heavy goods trains and passenger trains,” Pro Bahn chairman Karl-Peter Naumann told daily Ruhr Nachrichten.

Safety systems that immediately trigger an alarm if a train passes through a red light had “for a long time not been established in eastern Germany,” he said. Such systems needed to be fitted immediately, he said.

In western Germany, they were considered standard procedure, he said. Naumann called on Transport Minister Peter Ramsauer to make sure such systems were checked and repaired regularly through the Federal Railway Authority – the statutory authority for Germany’s rail operators.

“Safety must take precedence. It doesn’t come free,” he said.

The route is a single track section, and the trains smashed headlong into each other with such force that the HEX train – just an engine and one carriage – was catapulted off the rails and landed on its side. The freight train was pulling containers of chalk, and only stopped around 500 metres after the collision.

The clean-up efforts were largely complete by Monday morning. The passenger train was torn apart by the collision with the heavier freight train, and workers had to cut the wreckage into several pieces to remove it. The pieces were transported to the nearby town of Halberstadt for further investigation, a federal police spokesman said Monday morning.

A spokesman for the HEX firm said replacement buses were expected to take over the route between Halberstadt and Oschersleben in both directions for several days.