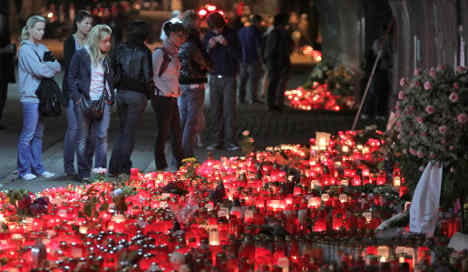 The first memorial to those who died in Duisburg. Photo: DPA

Panic broke out after too many people tried to get into the main venue of the massive rave in Duisburg. They were guided through a tunnel through which they did not fit – and met people trying to leave. People were killed in the crush and many more injured, while hundreds tried to escape by climbing up an embankment.

An investigation launched soon after the July 24 incident is now officially investigating 16 suspects for negligent manslaughter and negligently causing bodily harm. These include a leading police officer, Der Spiegel reported at the weekend.

It said that several members of the private security firm which provided stewards have now testified that it was a police officer who gave the fateful order to open the barriers and let the people through – despite the decision by organisers to close them in the case of threatened overcrowding.

“The officer took no notice of our protests that this would lead to a jam in the entrance tunnel and we had to follow his orders,” one of the stewards told the magazine.

It said several stewards have provided statements to the same effect – and that police officers demanded they hand over a tool with which to unlink elements of the barrier fencing. This tool – a piece of evidence – seems to have disappeared, the magazine said.

“The public prosecutor has to check whether the facts support this,” a spokesman for the North-Rhine Westphalia interior ministry said. Should this order have been issued, it would be for the justice system to decide whether this contributed to the disaster.