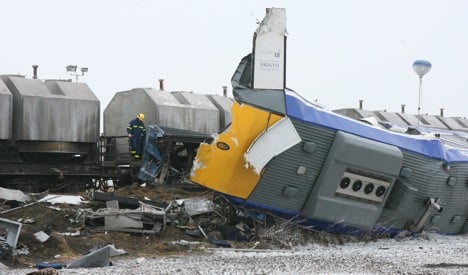 Around 23 people have been confirmed injured, some seriously, in the collision between a regional passenger train and a goods train. It is being described as Germany’s worst rail accident in years.

It has been reported that most of the fatalities – including the train driver and the conductor – died immediately as they were in the front of the passenger train while nearly everyone else on board were injured, up to 18 of them seriously.

The collision occurred on the HarzElbeExpress (HEX) train service between Magdeburg and Halberstadt at Hordorf near Ochersleben. Maintenance work was scheduled for the night, the HEX website said.

The route is a single track section, and the trains smashed headlong into each other with such force that the HEX train – just an engine and one carriage – was catapulted off the rails and landed on its side. The freight train was pulling containers of chalk, and only stopped around 500 metres after the collision.

Saxony-Anhalt’s state premier Wolfgang Böhmer was at the scene of the crash on Sunday and visited a number of injured people in local hospitals. He praised rescue workers and said the crash might have been caused by human error.

Police said all around 100 available personnel from the region were sent to the scene to help the injured, while rescue teams were also present with heavy engineering equipment to open the wreckage and reach survivors and remove the dead.

Fog in the area meant that helicopters could not be used to take the injured to hospital.

Two of the victims were only brought from the twisted metal on Sunday morning, and were not immediately identified.

A probe has been launched to determine the cause of the accident. “The investigation is currently looking in all directions, including human error as well as technical failure,” a spokesman for the federal police said.

He said that the trains had hit each other with such force that the passengers at the front were killed immediately.

“It is a difficult operation and I hope the colleagues get through it,” said fire fighter crew head Bernd Delecke.

The line was closed on Sunday while technical teams continued to work to clear the tracks. The nature of the spot and the catastrophic damage done to the passenger train means it may have to be cut into pieces on site, a spokesman for HEX said.

Chancellor Angela Merkel and Deutsche Bahn head Rüdiger Grube both released statements on Sunday expressing their shock at the accident and best wishes for the injured and relatives of those killed.

Germany has been hit by several fatal train accidents in the past few years.

In 2006, 23 people were killed and 10 injured when an experimental magnetic levitation Transrapid train crashed at 170 kilometres an hour on a test track at Lathen in northwest Germany in a collision with an inspection vehicle.

Three years earlier six people died and 25 were injured in June 2003 in a frontal collision between two regional trains near Schrozberg in the southwest of the country.

But the worst postwar train disaster occurred on June 3, 1998 when an InterCity Express (ICE) travelling from Munich in the south to Hamburg in the north hit a bridge and derailed, killing 101 and injuring 88 at Eschede in northern Germany.

Last August 15 people were injured when an ICE high-speed train travelling from Frankfurt to Paris hit a garbage truck near Lambrecht in southwest Germany.