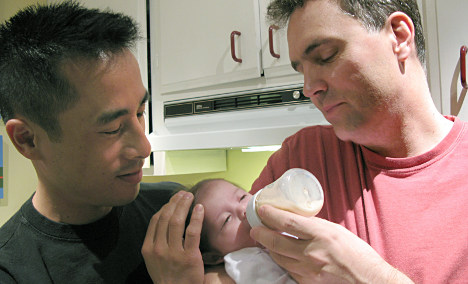 While homosexual couples are allowed to adopt their partner’s own biological children thanks to a Constitutional Court ruling in the summer of 2009, the same rule does not apply to non-biological adopted children.

But the Hamburg upper regional court (OLG) called this “unequal treatment of marriage and civil unions in current adoption law” that is neither constitutional nor in the child’s best interest, broadcaster NDR reported.

Straight couples face no restrictions when it comes to adopting non-biological children together.

The ruling, published this week after it was decided on December 22, 2010, found that the inheritance and maintenance claim rights gained through adoption by both parents provide additional safeguards for children, the broadcaster said.

The issue has been sent off to the country’s high court for review, but so far no date has been set, a court spokesperson said.

Meanwhile politicians from the environmentalist Green party called for the government to quickly write a new draft law to ensure equal adoption rights for gay couples.

Parliamentarian and Green party spokesperson for human rights issues Volker Beck told NDR that Justice Minister Sabine Leutheusser-Schnarrenberger must “finally” make a change that “ends the discrimination of homosexual parents and their children.”

The failure to do this puts children from such families at a disadvantage, he said.

“The adoption ban for gay and lesbian couples endangers child welfare and must therefore be ended,” said Beck, who is also the party’s chief whip.