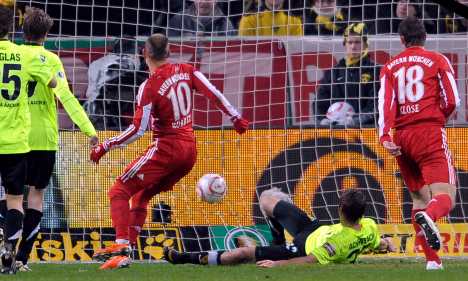 After their Dutch captain’s shock exit on Tuesday, when he signed for AC Milan until the end of the season, Germany defender Philipp Lahm took over the skipper’s armband as Bayern ran riot.

“We should have won this game a bit sooner, we certainly had our chances in the first half,” said goal-scorer Mario Gomez. “You have to give Aachen respect, they never stopped trying to play football, but we deserved the win.”

Bayern took their revenge after Aachen fans vandalised the Munich team coach’s luxury car, parked at the Tivoli Stadium, by spraying their team name down the side.

“It was a bit harder than the scoreline suggests, we had our chances, but we didn’t always take them in the first-half,” said Robben, who came off the bench despite suffering from a cold.

The Dutchman wished his compatriot van Bommel all the best after his sudden departure.

“I understand why Mark left Bayern, I wish him well, we talked about the situation a few times and he had his reasons,” said Robben. “He was an important player to us, now we have to get on with life without him.”

Bayern were rarely tested and Gomez opened the scoring on 26 minutes with his 24th goal in all competitions for the German giants this season when he was left unmarked for an easy header.

Müller netted twice in the 75th and 80th minutes to kill off Aachen’s challenge and with time almost up, Robben slammed home his shot on 88 minutes having come off the bench just a quarter of an hour before.

After missing the first half of the season with a leg injury, Robben has now scored two goals in two games, also netting in Saturday’s 5-1 rout of Kaiserslautern in the Bundesliga.

Earlier Hoffenheim’s former Liverpool striker Ryan Babel had a debut to forget as his new side were dumped out of the German Cup 1-0 by second-division Energie Cottbus in the quarter-finals.

Just a day after signing a two year contract for a fee of €7 million Babel had his debut wrecked when Cottbus’ Chinese midfielder Jiayi Shao came off the bench to score a late winner.

Dutch forward Babel played the entire 90 minutes, but failed to trouble the Cottbus defence as the hosts claimed a notable scalp.

The 30-year-old Shao, who has won 47 caps for China, came off the bench with a little over 20 minutes left and netted an 84th-minute winner to break Hoffenheim hearts.

Cottbus were joined by Second Division rivals Duisburg, who eliminated Bundesliga side Kaiserslautern with a shock 2-0 victory.

Duisburg were always in control and scored either side of half-time to book their place in the last four.

On Tuesday, Bundesliga side Schalke booked their semi-final berth when teenager Julian Draxler came off the bench to score the winner in time added on and seal a 3-2 win over Nuremberg with virtually the last kick of the game.