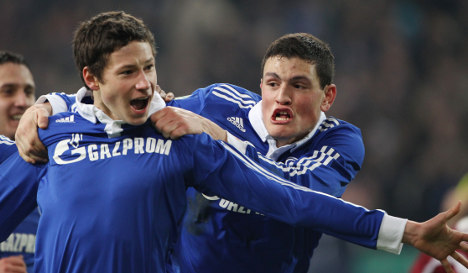 The Germany Under-18 midfielder, making only his third Schalke appearance, came off the bench in the 116th minute of the quarter-final and three minutes later scored from the edge of the penalty area for a fairytale finish.

“It is hard to describe how this feels, I was only just on the pitch for the last five minutes and I never dreamed this would happen,” said the stunned teenager.

“I have tomorrow off, so I’ll be going to visit some of my school friends to see what they make of this. It would be unbelievable to play in the final in Berlin now.”

Draxler only signed a professional contract earlier this month having caught the eye during Schalke’s training camp.

He played his first German league match against Hamburg ten days ago to become the youngest Schalke player to play in the Bundesliga, aged 17 years and 117 days.

Holders Bayern Munich are in action on Wednesday at second division side Alemannia Aachen, but Tuesday’s quarter-final belonged to Draxler who broke Nuremberg’s hearts with virtually the last kick of the game.

The Royal Blues, who won the last of their four German Cups in 2002, twice came from behind to level the scores with half an hour remaining of normal time, but Nuremberg, who won the cup in 2007, never gave up.

The visitors took the lead when striker Julian Schieber put his side ahead with less than five minutes gone.

Schalke, who have reached the last 16 of the Champions League, equalised at the Veltins Arena when Germany defender Christian Pander set up Swiss striker Mario Gavranovic on 14 minutes.

Schieber struck again with a bullet-like shot which gave Schalke’s Germany goalkeeper Manuel Neuer no chance on 32 minutes when he converted a cross in spectacular fashion.

But the Royal Blues showed the fighting spirit which have seen them get to the knock-out stages of European football’s top domestic competition with a superb equaliser this time from Croatia midfielder Ivan Rakitic on 58 minutes.

Neither side could break the dead-lock and the game went into extra-time before Draxler scored the winner.