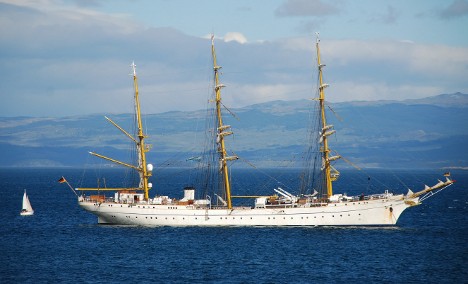 Cadets who trained on the ship detailed incidents for a team of investigators under Hellmut Königshaus, the German parliamentary liaison to the military, news magazine Der Spiegel reported.

The nine-page document includes descriptions of officers drinking “without restraint,” then forcing cadets to scrub their vomit from the ship’s deck.

On the evening of November 5, 2010 the crew reportedly celebrated raucously after arriving in the Brazilian port of Salvador de Bahia. During the night one of the instructors stumbled into a bedroom and shouted that “he hated cadets and would kill them,” according to the report cited by the magazine.

That incident occurred the night before 25-year-old crew member Sarah S., fell 27 metres to her death during a climbing exercise, sparking a “mutiny” now under investigation by German authorities.

Meanwhile other cadets told investigators that the crew behaved “like kings,” allowing barely any contact with cadets. Commander Schatz was “mainly seen wearing bathing trunks” and attended only mandatory meetings, the report said.

Other cadets reported that instructors immediately returned to regular training after the death of their comrade, with Schatz holding a “dry” speech that called the accident unlucky, but normal like a plane crash.

Another cadet reported incidents of sexual assault in the ship’s showers by instructors.

Pending further notice, the Gorch Fock will not leave the harbour in Kiel once it returns to Germany.

The ship will be out of action “until a commission is appointed, in cooperation with representatives of the German Bundestag, to decide the extent to which the Gorch Fock has a future as a training ship and ambassador for Germany on the world’s oceans,” Defence Minister Guttenberg told daily Bild.

According to broadcaster ARD, the ship’s captain was informed of his dismissal in a phone call. The Gorch Fock, which is currently moored in Ushuaia in Tierra del Fuego Province, Argentina, is expected to set sail for Kiel on February 4.

Schatz’s predecessor, Michael Brühn, is set to take over command of the ship. In its show Nachtmagazin, ARD reported that Brühn is also a member of the investigative committee that is expected to arrive in Ushuaia next Thursday.