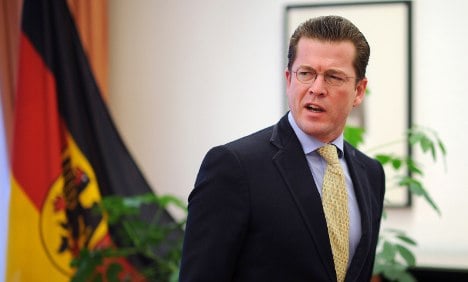 “I have nothing to apologise for,” Guttenberg told broadcaster ARD’s Morgenmagazin show on Friday.

The Defence Minister has been under fire from members of the armed services committee, who claim they were misinformed and first heard about the incidents through the parliamentary liaison to the Bundeswehr, Hellmut Königshaus.

A report presented to the committee indicated a 21-year-old soldier in Afghanistan, who died of a bullet to the head in December, may have been accidentally shot by a comrade messing around with a gun. Königshaus said up to 10 soldiers were involved in an apparent game at an outpost near the German base of Kunduz late last year, news magazine Der Spiegel reported on Thursday.

Guttenberg told ARD that the public had been properly informed of the circumstances of the soldiers’ death the day after the incident, which occurred shortly before Chancellor Angela Merkel visited armed forces stationed in the country. “We indicated during the chancellor’s trip in Afghanistan that the shot came from the weapon of a comrade,” the Defence Minister said.

In an interview with news agency DPA shortly thereafter, Guttenberg also addressed the circumstances of the soldier’s death – albeit indirectly.

But in its announcement of the incident, the Bundeswehr said the young soldier was discovered with the gunshot wound and subsequently died during an emergency operation – the implication being that he had committed suicide or accidentally shot himself while cleaning his weapon.

Meanwhile, the Greens’ parliamentary group leader Jürgen Trittin accused Guttenberg of trying to conceal the exact circumstances of the soldier’s death in Afghanistan.

Königshaus also commented on the alleged “mutiny” on board the navy training ship “Gorch Fock” last November. An investigation found that the crew rebelled and refused to climb the rigging of the historic navy ship after one of their comrades, 25-year-old Sarah S., fell 27 metres to her death.

On Friday, Königshaus told the paper Passauer Neue Presse that it’s necessary to examine which information was available to the Defence Ministry and military leaders and when.

Guttenberg told Süddeutsche Zeitung he had only learned of the alleged “mutiny” on Monday and had informed the navy’s inspector and the ministry’s legal department to investigate the incident.