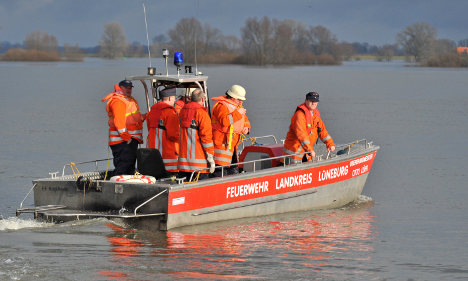 While the situation around Lüneburg remained tense, officials there said the disaster alert was largely a matter of administrative funding concerns.

“It’s not to say that we are all underwater,” an official there said. “But the coordination of safety measures and their costs will be assumed by the entire district.”

The town of Bleckede is particularly vulnerable. There the Elbe rose to 10.69 meters on Thursday, up an alarming 23 centimetres in a single day, according to the state’s Water Management, Coastal Defence and Nature Conservation Agency.

Authorities fear the Elbe could flood the town of Schnackenburg by Thursday night, while water levels in nearby Neu Darchau and Hitzacker are expected to reach seven meters by Friday.

The situation in the region is likely to remain critical for the next several days, they said.

Meanwhile the district of Ludwigslust in the eastern state Brandenburg is also on alert because the Oder River could potentially rise to 6.65 meters, some 10 centimetres higher than it was in the area’s most recent major flood in April 2006.

But after about a week of heavy flooding in Hesse, officials there reported the waters had begun to ebb along the Main River. Levels there dropped to a manageable 3.68 meters, and water barriers protecting Frankfurt’s famous central square Römerberg have been dismantled.

“The Main water level has fallen significantly, and we’re now ready to begin with the cleanup,” a Frankfurt fire department spokesman said.

The flooding continues to plague communities along rivers across the country as heavy rain accompanies a thaw melting large quantities of snow accumulated during frequent snowstorms in December.