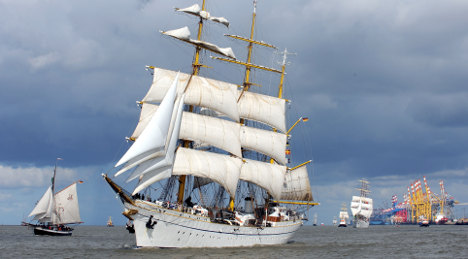 An investigation by Hellmut Königshaus, parliament’s liaison to the military, found that the crew rebelled and refused to climb the rigging of the historic navy ship after one of their comrades, 25-year-old Sarah S., fell 27 metres to her death last November.

Königshaus’ investigation of the Gorch Fock incident and its aftermath has painted a grim picture, meanwhile, of the standard of training on the ship, according to various media reports late on Wednesday.

The Gorch Fock is a traditional ship used by the navy to train prospective officers. The young sailor from Lower Saxony fell during a climbing exercise while the ship was docked at the Brazilian port of Salvador de Bahia, crashing from the vessel’s rigging onto the deck and dying of her injuries in a nearby hospital.

In a letter to the defence committee of the parliament, Königshaus wrote that many of the officer cadets “did not want to go aloft after the painful loss of their comrade and others did not want to continue on the Gorch Fock,” daily Bild reported.

Quarrels broke out on the ship. The commander of the Gorch Fock, Norbert Schatz, accused four cadets of “a lack of co-operation with the ship’s command” and said these four should be flown back to Germany on the grounds of “mutiny and inciting the crew.”

Several days later, the command decided that the entire crew of 70 officer cadets, and not just the original four agitators, should be returned to Germany.

It was known that the crew was flown back to Germany in November but the drama behind that decision has only now come to light.

Schatz later said of the crew’s unwillingness to climb the rigging: “As a boy I used to climb cherry trees in our neighbour’s garden and was always down again quick enough when he came out. Motor skills have dropped – youngsters don’t sit in cherry trees anymore but rather in front of computers.”

Königshaus wrote in his letter there had been “great pressure” on cadets to climb the rigging.

“If you don’t go up, you’ll fly home the next day,” an instructor is supposed to have told the cadets.