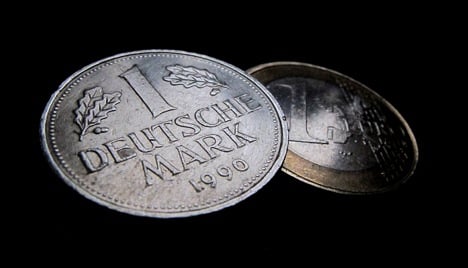 “There will be no return to the D-Mark,” Merkel said in an interview with this week’s edition of Stern magazine.

She reiterated that Germany was committed to the Europe’s single currency and “would do everything necessary to guarantee a stable euro.”

Merkel also dismissed the notion of a split in the eurozone between fiscally prudent northern countries, such as her own, and the debt-stricken south, where Portugal is seen as most at risk after debt bailouts for Greece and Ireland last year.

“Not with me. For Germany, this is a definite ‘No’. And relations in Europe are not that black and white in any case,” she said.

As the richest country in Europe, Germany is the biggest contributor to a multi-billion-euro fund designed to help ailing eurozone nations while polls have shown that rescuing Greece and then Ireland was unpopular.

Merkel also called for “more intensive cooperation” between the 17 countries that share the euro but insisted that this should not be limited only to eurozone members.

“What we agree should be open to all who want to join in,” the chancellor said.

A poll published in December by the mass-circulation daily Bild found 49 percent of those surveyed wanted the mighty Deutsche mark back.

However, a separate survey published Wednesday by insurance firm Allianz showed that inflation in Germany has been much lower since the euro was introduced than when Germans had the deutschmark in their pockets.

“Inflation in Germany has averaged 1.5 percent per year, much lower than in the times of the D-Mark when it was 2.6 percent,” Allianz chief economist Michael Heise told the Die Welt daily.

On Saturday, European Central Bank President Jean-Claude Trichet told Bild that inflation “has been more stable in the Federal Republic (of Germany) than over the previous 50 years.

“The Germans, too, are aware of how valuable it is,” said Trichet.