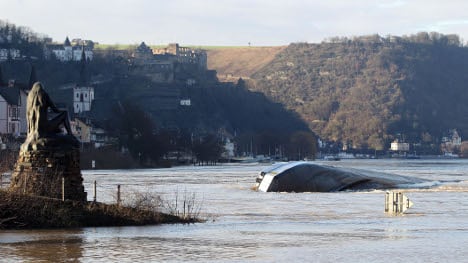 The ship, which overturned near the famed Loreley rocky point in Rhineland-Palatinate last week, could break free of its moorings because of a six-metre deep depression that has formed in the sandy river bottom, Martin Mauermann from the waterways and shipping authority in Bingen said.

“We’re doing what we can, but there’s no 100-percent guarantee,” said Mauermann, adding that an extra pontoon was expected at the accident site on Wednesday morning.

Presently, the 110-metre-long tanker is secured by six steel cables.

“It could get dangerous if one of the cables snaps,” Mauermann said.

The temporary measures are necessary because it will take several days for a floating crane, which will be used to raise the ship, to reach the area. Officials said there are no signs that the 2,400 tonnes of acid is leaking into the Rhine.

“We haven’t measured anything up till now,’ Mauermann said.

Approximately 200 ships are stuck waiting for the salvage efforts, but he could not say when limited traffic past the accident could resume.

The search for two missing crew members continued on Tuesday, but there is little hope they might have survived so long in the cold river.