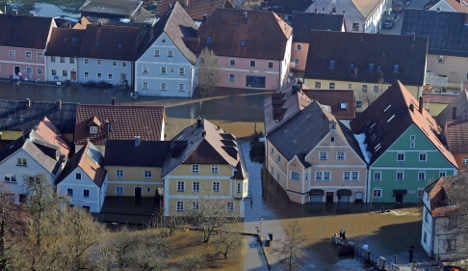 Sunshine but wet - Kallmünz in the Oberpfalz on Sunday. Photo: DPA

Meteorologist Christoph Hartmann from the German Weather Service (DWD) said on Sunday the cold front would bring some rain to the north west and furthest northern regions of Germany during Monday and then track down to the Alps.

The rest of the country should remain largely dry with some sunny spells and top temperatures between seven and 12 degrees. Monday night will see further rain in the north, but otherwise the night skies will be clear or have some high cloud.

Those areas under cloud will remain frost-free overnight, with lowest temperatures expected to be between six and two degrees – places where the sky is clear will see temperatures drop to between two and minus three degrees.

Tuesday will see heavy cloud cover in the north and northeast with some isolated rain showers and many incidences of fog and mist. It will remain mild with top temperatures between four and nine degrees.

The cloud will break up from the north west on Wednesday and the region will remain largely dry although the south will be very cloudy, with showers.

The news that only a little rain is to be expected in the coming week has provided some cheer to areas standing under floodwaters.

The situation in Regensburg on the Danube has eased somewhat after the river threatened to break its banks on Saturday. But in Frankfurt, rescue services are preparing for a second wave of floodwater.

The search for two men who disappeared in the waters in Hesse failed to produce any results over the weekend and authorities are assuming they drowned. A 59-year-old man fell into the Steinach on Thursday and was carried away, while another man jumped into the Fulda while being chased by police, and disappeared.

The centre of Wertheim in Baden-Württemberg is still under water, directly affecting around 1,000 people and causing millions of euros of damage. There is still no all-clear in Saxony-Anhalt where experts expect water levels to continue to rise as the warm weather continues to melt snow and ice.

In Dresden many are still concerned, but it seems the city on the Elbe should escape relatively unscathed – the massive floods of 2002 saw the high water mark at 9.40 metres, while this year it is not expected to exceed seven metres.