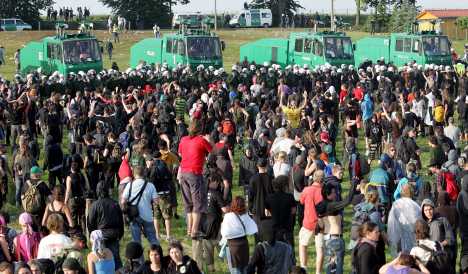 Mark Kennedy caused a scandal and the collapse of a court case in the UK after dramatically offering to testify on behalf of environmental activists who had tried – with his help – to shut down a power station in England.

Kennedy, who was known as Mark Stone in his activist guise, was an officer for London’s Metropolitan police and went undercover in 2003 to infiltrate networks of activists in a number of different countries including the UK, Germany, Ireland and Iceland.

He is thought to have been particularly active among German protest groups during the preparations for the G8 summit in Heiligendamm in 2007.

Green MP Hans-Christian Ströbele has called for the parliamentary control committee and the interior committee to investigate the case amid suggestions that he may have been used by the German government as well as the British one.

“The federal government must reveal whether Kennedy possibly committed or initiated crimes in Germany as an agent provocateur,” Ströbele told Der Spiegel.

He said that should it appear that Kennedy had broken laws while in Germany, he should face prosecution. “German law also applies to British agents,” he said.

American activist and filmmaker Jason Kirkpatrick who lives in Berlin and knew Kennedy since 2004, said the undercover cop had taken part in preparation meetings of the ‘Dissent’ protest network.

The British Guardian newspaper, which has led reporting on the story, said Kirkpatrick suspected Kennedy could have been under instruction from the German authorities.

He told the paper, “One day late 2009, early 2010, Mark asked me out of the blue if I knew any places in Germany with Nazi issues. He said he had a ‘crew’ in England who could come and sort them out. I was shocked to hear him talk of violence like that.”

The paper said Kirkpatrick reasons that the British authorities could have had no legitimate interest in German anti-fascists and believes therefore that Kennedy was also under instruction from German authorities.

“He taught them, among other things, how to chain themselves to vehicles and objects so that the police cannot remove them,” he said.

Irish activist Mark Malone told the magazine that Kennedy had stirred things up during the 2004 May Day demonstration in Dublin, saying that he was one of those who had urged the crowd to break through police lines.

Andrej Hunko, MP for ‘The Left’ party asked questions in parliament about Kennedy’s actions in Germany just before Christmas but the German government refused to respond for ‘operational’ reasons, the Guardian reported.

He has joined Ströbele in submitting new questions which must be answered by next Wednesday, the paper said.