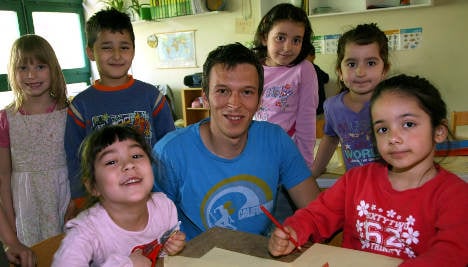 Marcus Kopsch at his kindergarten workplace in Berlin. Photo: DPA

Schröder told the Chemnitzer Freie Presse the aim was not to have half the kindergarten staff being men, which she said was illusory. The aim, she said, was to enable all those who are interested, to have access to the profession.

“If we had one or two men in every kita,” it would be a success, she said. The new programme will enable unemployed men to apply for a training course via the work agency, copying a project in Brandenburg which Schröder said had been successful for years.

She said there was often a lack of male role models for young children, particularly those who grow up with lone mothers. Some children can reach the age of ten or so with pretty much only women around them – at home and at kindergarten and primary school.

“That is negative [for boys],” said Schröder. “It is also not good for girls. Children profit from experiencing both genders.”