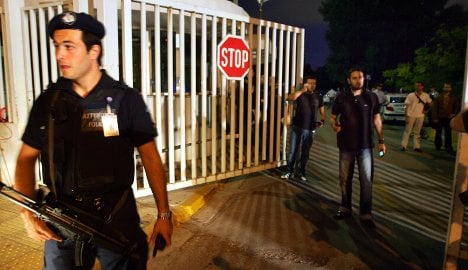 The arrest is related to past bomb attacks on government buildings. Photo: DPA

The 27-year-old arrested in Athens was identified by police as Marie Fee Meyer, daughter of Barbara Meyer, who has been wanted since 1993 by German police in connection with the terrorist Red Army Faction, also known as the Baader-Meinhof gang.

“A German national has been arrested in Athens and will be arraigned with the remaining four suspects,” a police statement said. “A police search is in progress at her home.”

Active in Germany from 1970 to 1998, the RAF carried out hundreds of terrorist attacks and was responsible for over 30 deaths.

Marie Meyer was to be brought before a prosecutor along with four Greek men arrested on Thursday over an outstanding warrant in connection with an arson attack in Thessaloniki in October.

Police said Meyer had been living in Athens since arriving from Thessaloniki, Greece’s second largest city, seven months ago, and is an acquaintance of four men arrested on Thursday.

The men, aged 21 to 23, were arrested after anti-terrorist police raids on two homes in Athens where they found a Kalashnikov assault rifle, a handgun and materials that could be used to make fake identity cards.

Forensic tests are ongoing but the handgun has not been matched to known attacks, the police said.

The four men had been wanted in connection to an arson attack against a public electricity company building in Thessaloniki in October.

Police said the raids were linked to ongoing investigations against the Conspiracy of Fire Nuclei group, several of whose alleged members are already behind bars and face trial on Monday.

Nine people accused of participation in the outfit’s activities, which include scores of arson and bomb hits against government buildings and the offices and homes of politicians, will be tried on Monday at a special courtroom inside high security Korydallos prison near Athens. Another four suspected members still at large will be tried in absentia.

In November the anarchist outfit sent more than a dozen parcel bombs to foreign embassies in Athens and to European leaders, slightly injuring one person. A package was also intercepted at Chancellor Angela Merkel’s office as part the wave of attacks linked to leftist extremists.

Last month, it issued a manifesto threatening justice officials ahead of the Monday trial.