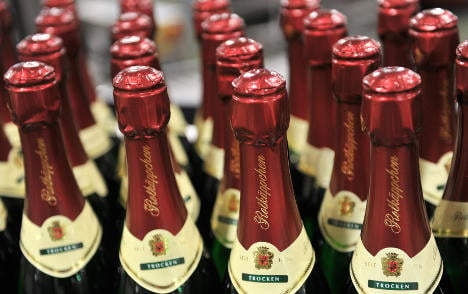 Cornering almost half of the German market, Rotkäppchen-Mumm sparkling wines are one of the former East Germany’s biggest success stories. But the history of the Freyburg an der Unstrut-based company goes back to 1856, when the brothers Moritz and Julius Kloss and their friend Carl Foerster opened a wine shop in this town in Sachsen-Anhalt. Seeing demand, they soon began producing their very own sparkling wines known as Sekt in German.

After a trademark dispute in 1894, they named their company Rotkäppchen because of the red bottle cap they used. (Rotkäppchen means, literally, ‘Little Red Cap,’ and is also the name of the heroine in the Brothers’ Grimm story, ‘Little Red Riding Hood’). Indeed, since then, the company’s fortunes have risen and fallen in a series of twists every bit as thrilling as Red Riding Hood’s adventures. And like the fairytale’s plucky heroine, the company has always bounced back buoyantly from difficult circumstances.

Celebrated by Kaiser Wilhelm II, the sparkling wine made its way to officers’ messes in the first years of the 20th century. But the inflation of the Weimar period hit hard: in 1923, a bottle of sparkling wine cost 1,928,000 marks. East Germany nationalized the company after Word War II, and it thrived again. Communist leader Erich Honecker used the home-grown bubbly to toast Fidel Castro, and production peaked in 1987 at 15 million bottles.

The fall of the Iron Curtain was accompanied by a dramatic fall in sales: in 1990, Rotkäppchen sold only 1.8 million bottles. But a series of upgrades and investments made both before 1989 and in the years following reunification got the company back on track.

In early 2002, Rotkäppchen did what few other East German companies had managed when they took over the West German-based brands Mumm, Jules Mumm and MM Extra. In 2003, Rotkäppchen-Mumm Sektkellereien, as they are now called, did it again, buying out another West German firm, Geldermann sparkling wines. In 2006, the acquisition of Kloss & Foerster followed, as did the buyout of Eckes Spirits and Wine.

Today, sparkling wine lovers curious about the history of this German company can visit the original cellar in Freyburg. There, they can pick up a bottle of the traditional sparkling wine, or try one of the newer products, like the Rotkäppchen dry Reisling. (They can also check out Germany’s largest carved cuvee vat, which was built for the company in 1896 using 25 oak trees.)