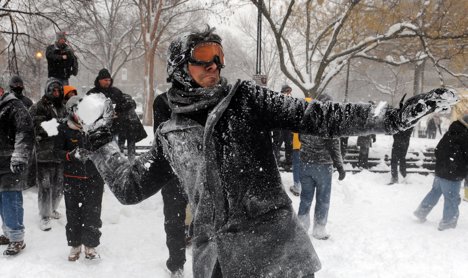 An official at the public works office in the southeastern district of Neukölln said concerns about security and the risk of damage to trees and bushes in Hasenheide Park had led authorities to reject the plans.

The event called “Kreuzberg versus Neukölln,” named after rival Berlin neighbourhoods popular with hipsters, drew about 500 snow-wielding rivals for the inaugural battle on January 10, 2010.

Organiser Ruwen Warnke advertised the January 1, 2011 follow-up on Facebook, YouTube, Twitter and MySpace and generated huge interest with a video from last year’s scrum. Some 8,000 said they would attend.

Due to the size, Warnke sought official approval to use Hasenheide Park but to no avail.

“A crowd of that size would be uncontrollable and that is too much to ask of the police,” the public works official, who asked not to be named, told news agency AFP.

“Plus, if you had masses of people, there would inevitably be damage to the greenery in the Hasenheide.”

In late November, a playful snowball fight in the eastern city of Leipzig turned into a violent melee involving more than 500 people, with fireworks, bottles and stones thrown into the mix.

A group of 40 people had gathered to toss snowballs at each other but the game quickly degenerated into a massive free-for-all that required police intervention. Two officers were wounded in the fray and a police car was damaged before

the group could be broken up.