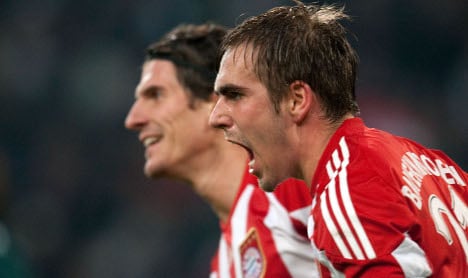 “The result is very disappointing. We’re lacking six or seven points, and Dortmund had an excellent first half of the season,” the 27-year-old told the daily Bild.

“This is bitter for us, but in the second half we’re going to give it all and make sure the season stays exciting. If anyone can catch up, FC Bayern can.”

Defending champions Bayern have been plagued by injuries so far this season, but the side have had a good run of late and coach Louis van Gaal is confident that Dutch playmaker Arjen Robben will return after the winter break.

Going into the break with wins over Stuttgart and St. Pauli, Bayern are now fifth – four points behind second-placed Mainz. But Dortmund are still 10 points in front of Mainz.

Bayern, meanwhile, are also on the lookout for a new goalkeeper to replace veteran Jörg Butt, 36, whose contract expires at the end of the season. Reserve shot-stopper Thomas Kraft, 22, is in the same situation.

Lahm said that he would be happy if Schalke’s goalkeeper Manuel Neuer – who was Germany’s first-choice man between the posts in this year’s World Cup – came to Munich.

“But I’m not really giving it a great deal of thought because we have Joerg Butt and Thomas Kraft,” he said.

Bayern is not the only big European side on the lookout for a new keeper.

There has been speculation that Manchester United might also have their eye on Neuer to replace veteran Edwin van der Sar, 40, between the posts at Old Trafford when he leaves at the end of the season.

Adler has a get-out clause in his contract allowing him to leave before 2012, but only if he moves to United, and for €24 million ($32 million), Bild reported.