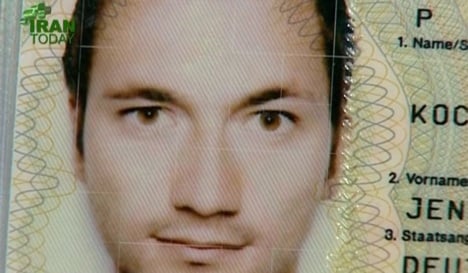 Iranian TV image of passport of one of the reporters, Photo: DPA

Westerwelle told the Bild am Sonntag newspaper, “I want to express my expectation that the meeting with the relatives will yet occur during the Christmas holidays.”

A sister of one of the reporters, and the mother of the other, travelled to Tehran on Christmas Eve to visit them.

The two journalists have been imprisoned since October 10, after being arrested for interviewing the son of Sakineh Ashtiani, a woman sentenced to death by stoning for murder and adultery, without the proper press permission. They had travelled to Iran on a tourist visa.

The two have been accused of espionage and planning a smear campaign against Iran. “The work of these two tourists in Iran and Tabriz and the way they reported in Tabriz shows that they came for espionage,” Malek Ajdar Sharifi, the justice department chief of East Azerbaijan province in the northwest of the country, said in November.

The pair were arrested at the office of Ashtiani’s lawyer while trying to interview her son and after taking pictures of Tabriz prison, where the woman is held.

The Germans reportedly work for the Axel Springer media group in Germany. Foreign reporters need special press visas to be able to work in Iran.