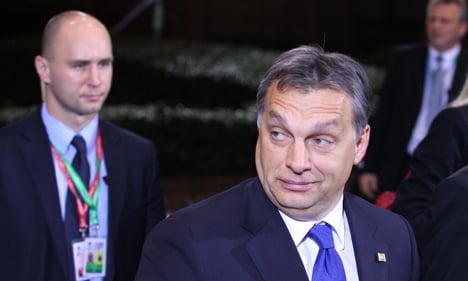 “As for the poor German chancellor – she has been dragged into this,” Orbán said in sympathy for his German counterpart, after Chancellor Angela Merkel warned Hungary over its new laws. Orbán said that Merkel’s spokesman had simply said that an EU state must abide by EU norms. “Hungary is doing that,” Orbán asserted.

Merkel released a critical statement this week after the Hungarian parliament passed a law establishing a new body with powers to oversee public news production and levy high fines on private media that break rules on political journalism.

Hungarian author György Konrad compared the law to measures taken in the early phase of the Nazi regime. “It reminds me a lot of 1933, when the National Socialist party came to power with a electoral majority under apparently democratic conditions,” he told German newspaper Berliner Zeitung.

Merkel’s statement said the German government viewed the legislation with “great attention.” But some European parliamentary members allied to Merkel ridiculed the criticism of Hungary.

“We don’t dream of changing the law,” Orbán said Thursday night on Hungarian TV. He said there was not a single clause that did not conform to comparable laws in “some” EU country. “I’m not inclined to react to parliamentary debates or the western reaction with trembling knees,” he said.