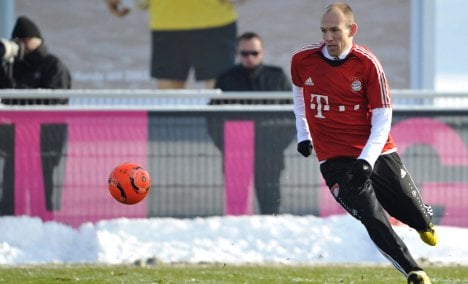 Bayern are sixth in the table and lag 17 points behind leaders Dortmund, but are set to welcome back injured stars Robben, Germany veteran Miroslav Klose and striker Ivica Olic after the Christmas break.

The Bundesliga finishes for the year on Sunday evening with Bayern’s game and coach Louis van Gaal wants three points from Stuttgart to close the gap.

The champions are expected to launch a title surge next season, especially with chief playmaker Robben due back in January.

The Dutchman has been out since July’s World Cup with a torn hamstring, but resumed training on Thursday and said he is looking forward to his anticipated Bundesliga return against Wolfsburg on January 15.

“I’m part of the team again,” the Dutch ace enthused after his first session back with the squad. “I’ve worked towards this for a long time, being back on the pitch with the lads is an indescribable feeling.”

After seeing Stuttgart win 5-1 in Europa League action on Thursday night against Danish club Odense, coach Bruno Labbadia faces Bayern in his first league game in charge since taking over from Jens Keller, who was sacked last weekend.

Although coach Jurgen Klopp refuses to talk about Dortmund winning their first Bundesliga title since 2002, his young side are 11-points clear of second-placed Leverkusen.

They wrap up the first half of the season on Saturday against Frankfurt and face rumours Germany defender Mats Hummels is being courted by Bayern with a view to a transfer over in the January break.

Frankfurt have the league’s top scorer Theofanis Gekas, who has netted 13 goals this season, in their side, but with 39 goals already this season, Dortmund are flying high.

Leverkusen are at home to fifth-placed Freiburg on Sunday and will be without Germany goalkeeper Rene Adler, who has a knee injury.

Fourth-placed Mainz are at Hamburg-based St Pauli on Saturday with coach Thomas Tuchel desperate to avoid a third-straight defeat.

Mid-table Bremen are home to Kaiserslautern with 34-year-old captain Torsten Frings admitting he is considering retiring at the end of the season when his contract expires.

Bremen are without striker Hugo Almeida, who is suspended for a red card, while ex-Chelsea star Claudio Pizarro is expected to play.

Hoffenheim are at Wolfsburg on Saturday with both sides facing speculation involving Bayern.

While Munich captain Mark van Bommel has been linked to a January switch to Wolfsburg, Hoffenheim defensive midfielder Luiz Gustavo is reported to be a target to replace the Dutchman in Bayern.

Hoffenheim are without midfielder Tobias Weis who has a thigh injury.

After their terrible start to the season which saw them lose their first four games, Schalke 04 are up to mid-table and chasing their third-straight win when they play Cologne on Saturday.

Coach Felix Magath has reacted calmly to the latest rumours about goalkeeper Manuel Neuer being set to join Bayern in 2012.

“Speculation in the papers doesn’t interest me,” he said.

“I am only concerned with something if it is put to me directly.”

Cologne are without forward Milivoje Novakovic who has a thigh injury.