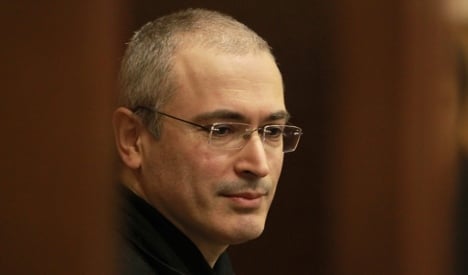 Khodorkovsky, 47, was awarded the Rainer Hildebrandt International Human Rights Award. It was presented to his mother, Marina, at the Check Point Charlie Museum, a symbol of the Cold War and the Wall that divided Berlin.

The latest trial that Khodorkovsky has had to face in Moscow “is a political trial”, said Markus Löning, in charge of human rights in the German government, in presenting the prize.

German parliament speaker Norbert Lammert added that the trial indicated that “Russia and its government have shown no interest in a rapprochment with Europe.”

Khodorkovsky, already serving an eight-year sentence for fraud, is on trial on new charges of money laundering and embezzlement that could see the head of the now defunct Yukos oil giant receive another 14-year jail term. A court will begin reading the verdict on Wednesday.

To human rights campaigners, Khodorkovsky is the one who dared to oppose powerful Prime Minister Vladimir Putin, claiming he was arrested in 2003 as revenge for financing opposition parties.

Accusations his jailing was a political stitch-up masterminded by top officials close to Putin have led Western capitals to view the new trial as a test for Russia’s commitment to democracy under President Dmitry Medvedev.