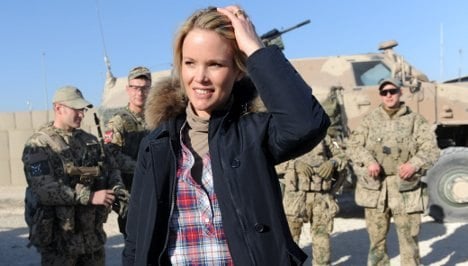 It is the first time a minister has taken his or her spouse on such a trip to the war-torn country, a Defence Ministry spokesman said. Roadside bombs, suicide attacks and ambushes are ever-present dangers in the country, where about 5,000 Bundeswehr soldiers are among the international force battling the Islamist Taliban.

The couple visited Mazar-i-Sharif in the north of the country early on Monday and were then due to travel to the German base at Kunduz.

Guttenberg planned to talk to commanders and soldiers about how the mission could be improved. Such personal conversations were important in the pre-Christmas period, the ministry spokesman said.

Stephanie zu Guttenberg’s presence on the trip intended to emphasise the support the soldiers had on the mission. She planned to meet with women soldiers and visit injured soldiers in hospital.