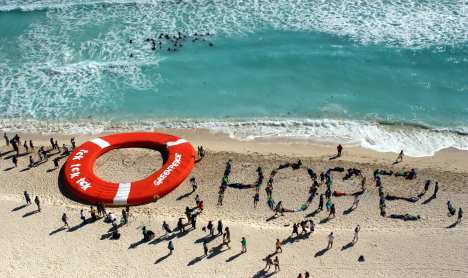 Röttgen acknowledged that the measures adopted by delegates were not enough to prevent global temperatures from rising more than 2 degrees Celsius – a target officially recognised during the two-week talks – but said the progress made in Cancún constituted an important step forward.

“We don’t want to sugarcoat it, but you can also appreciate that movement did occur,” the environment minister said, adding that work must continue. He said a binding agreement, ideally a new treaty, was the goal, and admitted that negotiators still had “a long way to go.”

After two weeks of wrangling, representatives from more than 190 countries arrived at a compromise early Saturday morning.

Delegates agreed on two texts that outlined a number of smaller-scale measures to tackle climate change, including the establishment of a fund to help developing countries grapple with the effects of global warming.

From the very beginning, however, it was clear that the negotiations were unlikely to yield a binding successor treaty to the Kyoto Protocol, which is set to expire in 2012.

Röttgen defended the compromise, despite opposition from members of the Bolivian delegation, who spoke out multiple times against the text contained in the document.

Though Greenpeace described the compromise as a “sign of hope,” other environmental advocates were less enthusiastic in their assessment of the talks.

“The result of Cancún will not keep global warming under 2 degrees (Celsius),” said Hubert Weiger, head of Friends of the Earth Germany (BUND). “Unfortunately, countries like the USA, Japan, Canada, Australia and China blocked further progress.”