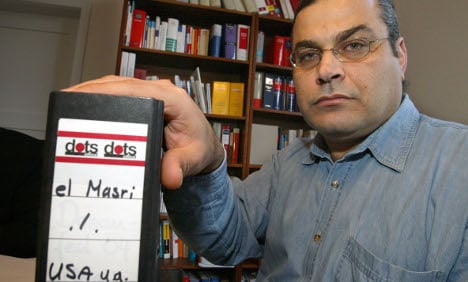 A file photo of el-Masri with his case file. Photo: DPA

The information, made public on Wednesday in diplomatic cables released by Wikileaks and first reported by the New York Times, involved Khaled el-Masri, a German citizen of Lebanese origin.

In one of the most notorious examples of alleged “extraordinary renditions” of “war on terror” suspects under the government of former US president George W. Bush, Masri says he was abducted by US agents in Macedonia on December 31, 2003.

Masri said he was held and tortured in a secret US prison in Afghanistan before US agents realized their mistake and released him, five months later, on an Albanian roadside.

“On the first day of my abduction, they told me that I was in a country where there were no laws,” Masri said in a radio interview in 2005. “I was hit and humiliated,” he added. “I really thought I would never get out of there.”

Press reports said that US agents confused Masri with an al-Qaida operative with a similar name and alleged links to the September 11, 2001, attacks on the United States.

In January 2007 German prosecutors issued arrest warrants for 13 people in connection with the case after being given a list of names by Masri’s lawyer, but this was dropped later that year.

In a February 2007 cable classified “Secret,” and titled “Al-Masri case – Chancellery aware of USG concerns,” the US deputy chief of mission in Berlin, John Koenig, emphasized to German Deputy National Security Adviser Rolf Nikel “that issuance of international arrest warrants would have a negative impact on our bilateral relationship.”

Koening “pointed out that our intention was not to threaten Germany, but rather to urge that the German Government weigh carefully at every step of the way the implications for relations with the US.”

The dispatch was written by William Timken, Washington’s envoy to Berlin.

Contacted by AFP on Thursday, the German foreign ministry declined to comment on the leak, but allegations that Washington applied pressure on Berlin are not new, and the case clearly strained US-German relations.

Chancellor Angela Merkel said after a 2005 meeting in Berlin with Condoleezza Rice, at the time US secretary of state, that the case had been “accepted as a mistake by the US government.”

Senior US officials later suggested that Merkel had misunderstood Rice, although the secretary of state did not correct the German leader during a press conference where the comments were made.

The case caused consternation in Germany and prompted a parliamentary enquiry on the extent to which authorities were aware of Masri’s rendition and whether Berlin had been asked by Washington to keep quiet.

The enquiry in 2009 cleared the government of having been aware of the alleged kidnapping when it happened, but criticised Berlin for subsequently being insufficiently forthcoming with information about the case.