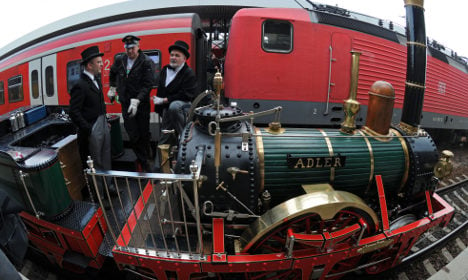 Deutsche Bahn CEO Rüdiger Grube, Transportation Minister Peter Ramsauer, Bavarian Economy Minister Martin Zeit and other officials will also be on hand for the culmination of celebrations and exhibitions that took place around the country this year.

The Adler clocked 35 kilometres per hour on its first journey, flanked by jubilant citizens along the tracks. Just five years later the country had laid some 500 kilometres of railway, and by the First World War, Germans were travelling on a network of some 58,000 kilometres of tracks, which had become the vehicle of industrialisation.

Troops were transported to the front during the war, and afterwards the country combined various state-level services to create a national railway.

Today high-speed ICE trains race through Germany at speeds of up to 300 kilometres per hour, though the network has been reduced to a route system of 38,000 kilometres.

But Germany’s railways also played a major role in the country’s darkest hours.

“Neither the war of extermination in the east or the deportation of millions to concentration and death camps would have been possible without the state railway,” Deutsche Bahn said.

When Germany was divided after the Second World War, rail service developed separately in the east and west. While trains in the west competed with cars and aeroplanes, East Germany’s main form of transport for both people and goods remained the railway.

The two services were merged after reunification 20 years ago, and trains remain an integral part of Germany’s industry, tourism, and daily life.

Sadly the original Adler steam locomotive no longer exists. The steam engine was converted into factory engine in Nuremberg in 1858, though a replica stands in Deutsche Bahn’s museum there.