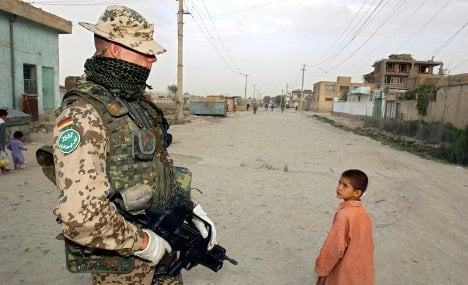 Nine years after the international deployment in Afghanistan began, approval of the German military has reached an all-time low. Things are particularly bad in the northern Kunduz province, according to the annual poll conducted by German broadcaster ARD along with the BBC, US station ABC and daily newspaper The Washington Post.

Overall, two-thirds of the Afghan participants had a negative opinion of NATO troops. But at 39 percent, the number who approved of attacks on troops in the northern regions overseen by the Germans was well above the national average of 27 percent.

Across the war-torn country, some 41 percent of the poll participants said they had a negative perception of Germany, which has increased its military patrols in the face of increasing attacks in the north in recent months.

In the summer of 2007, some 75 percent of those polled said they had a positive view of Germany, but in 2010 that number dropped to the minority opinion of 46 percent.

Four out of 10 in the north said they felt NATO wasn’t worried about civilian victims and had neglected development work, while just 31 percent (down by 15 points) said German-led forces still had the support of the Afghan people.

“Germany is hardly considered an ally of the people any longer, but almost only as a foreign party to war,” ARD foreign desk editor Arnd Henze said.

“Occasional successes in the fight against the Taliban and rebuilding the Afghan army are pragmatically registered, but German engagement no longer reaches the hearts and minds of the people.”

Despite the difficulties, some 59 percent of Afghans said they believed their country was on the right track. Though this number was down by 11 points from the 2009 poll, it was still up 19 points from 2008 values.

And despite negative views of foreign forces, some 54 percent said they supported the presence of NATO troops.

Bundeswehr brigadier general and ISAF spokesman Josef Blotz told news agency DPA that while there are isolated “hot spots” in Afghanistan, “the country is not in flames.“

“We have shown that progress is possible. But this progress is still fragile and not yet irreversible,” he said, adding that international troops would not allow the Taliban to pressure them over the winter.

The sixth annual poll by the four news outlets questioned 1,691 representative Afghans in all 34 of the country’s provinces in November.