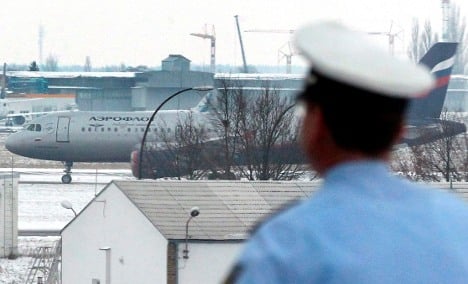 The flight with 140 passengers was scheduled to take off for Moscow at 9:50 am, but authorities stopped it after police received a bomb threat from a Berlin number, along with reports of several faxes with a similar message sent to media outlets just 30 minutes before the plane was set to take off.

The sender of the faxes identified himself as “Kommando Abu al-Walid al Ramedi,” and said he wanted to honour the “fight of the Chechen people.”

But an unnamed source told the paper that the threat was likely linked to the deportation of 45 Vietnamese nationals on the flight.

Early on Monday morning human rights activists tried to prevent the departure of the Vietnamese deportees with a blockade of the state facility where they were being held in Grünau. Police forced the activists out of the way twice along the route to the airport, the paper said.

Another 42 activists demonstrated at the airport, leading to scuffles with police. Six activists were banned from the building, police spokesman Jens Quitschke told the paper.

In June 2009, some 200 people protested at the same airport against the mass deportation of 109 Vietnamese asylum-seekers in Germany and Poland.