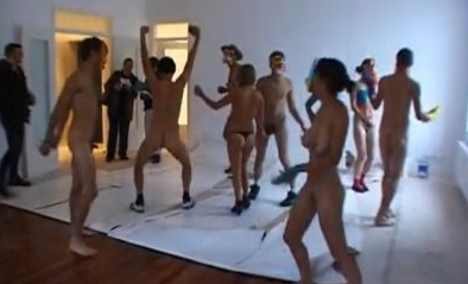 Clothes off, cartoon masks and music on. The 10 or so young Berliners get naked in seconds, dancing around at a flat viewing in an unusual form of protest at quickly rising rent rates in their city.

Bopping around in the buff in the living room of this apartment in the formerly communist East Berlin district of Friedrichshain, the demonstrators quickly drew the ire of the estate agent conducting the viewing.

“Get out! I’m calling the police,” he screamed, trying in vain to grab one of the naked dancers as techno music boomed.

On this cold Berlin winter’s day, with the mercury well below zero, the “Hedonist International” organisation has decided to bring its special brand of protest to this flat, which they deem too expensive.

Sixty-three metres square (678 square feet), “completely renovated with cherry-wood flooring throughout, high ceilings, and a top-of-the-line, kitchen” according to the agent’s blurb. The asking price is €726.08 per month, heating included.

Too much, says Nick, one of the main organisers of the protest, who spoke under an assumed name.

“Rents have risen by 50 percent in this area in the last few years,” he said. “I had to wait for six months to find an apartment. For people with families, it’s even harder,” said the 28-year-old student.

In certain trendy parts of Berlin, the demand for housing has exploded – the district of Friedrichshain being a prime example.

Formerly a working-class district deep in East Berlin, the area has undergone a rapid process of gentrification, transformed from a hang-out of squatters and punks to a haven for hipsters and buggy-pushing young couples.

“We started this summer,” said another demonstrator, who gave his name as “Luther Blissett.”

He said the activists had taken inspiration from the French group “Black Thursday” which organises similar protests at ballooning prices in Paris.

“But our unique selling point is that we are naked,” he quipped.

In Berlin, rental prices are considerably lower than in other major European capitals such as London or Paris and much cheaper than in New York, Tokyo or Mumbai.

A building boom that took place after the fall of the Berlin Wall 21 years ago left supply hugely outstripping demand and lower living standards in the former communist east also kept a lid on prices.

But all this is changing, said Empirica, a housing consultancy, which cited a 14-percent rise in rents in just the past year.

“It’s young and mobile households that are particularly affected,” said one of the firm’s experts, Reiner Braun.

“Students looking for a first-time place, young families searching for a larger apartment and those forced to move for professional reasons” are being hit by rising prices, Braun said.

Meanwhile, back in Friedrichshain, the agent has made good on his threat and two police vans and three patrol cars, sirens wailing, screech to a halt outside the apartment.

The hedonists had already gotten dressed and fled, hastily zipping up flies and reclipping bras.

“What we’re doing is not a crime,” said Nick. “These are public viewings and we are not entering the apartments by force.”

The agent, livid, refused to respond to questions. “No comment. No pictures. Out!” he said.

Another young man who came to view the apartment was also unimpressed with the protest.

“I don’t go to an apartment viewing to see cocks,” he harrumphed.

For now, the protests have called a halt to their unique brand of demonstrating. Have they lost their motivation?

“Oh no,” said Peter, one of the members. “But it’s winter now. It’s getting a little bit chilly to be getting naked.”