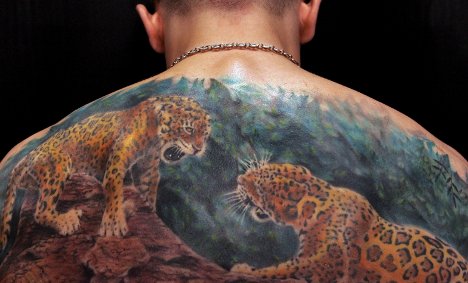 With DJs, Kung Fu masters, rock bands, and Polynesian dancers this isn’t your typical tattoo gathering. Though in addition to all the live entertainers, hundreds of the world’s top tattoo artists will be demonstrating their art. Ladies, who among you will be next year’s queen?

The German capital is magical at Christmastime. Join this merry bus tour on a joyful jaunt through the city Sunday. Led by American drag queen Chicago “Mama” Rose and German tour guide Markus Müller-Tenckhoff, this fun-filled excursion stops off at Christmas markets around town. Which one has the best Glühwein?

Ramp up your record collection this weekend. Dozens of dealers set out boxes of funk, jazz, hip hop, soul, rock, and electro LPs Sunday at Cologne’s Opernterrassen. Fill up on waffles, then go browse the stacks. There’s no saying what gems you might find in those dusty old jackets.

Oh Tannenbaum, oh Tannenbaum! Those lovely branches vocalise their own virtues this weekend as members of the German-American Community Choir deck themselves out with green garb and shimmering garlands. Hear the twinkling troupe sing their medley of new and classic Christmas songs at Frankfurt’s Frauenfriedenkirche.

This Russian vocal ensemble presents seasonal songs from their homeland Wednesday at International Theater. Graduates of the Rimsky-Korsakov Conservatory, these St. Petersburg boys fa la la la la like the best of them.

With Broadway hits like “West Side Story” and “Fiddler on the Roof” on his CV, Jerome Robbins was one of the most successful American choreographers of the 20th century. On Sunday, The Hamburg Ballet premieres its production of two Jerome Robbins’ pieces – “Dances at a Gathering” and “The Concert.” Watch the company waltz and whirl to the music of Chopin.

Thanks to the Industrial Revolution, Americans got rich and started collecting art. Soon enough, museums were popping up around New York City, San Francisco, and Washington D.C. Find out more about the history of America’s art museums and how they differ from their European counterparts at Munich’s Amerikahaus on Friday.

“Do you like American music? We like American music.” Or so sang the Violent Femmes. They’d love Sunday’s jamboree at Amerikahaus. Bands from Nashville and Austin play their fiddles and banjos in the style of their Appalachian brethren.

Subjective. The Documentary Film in the 21st Century

Munich’s Pinakothek der Moderne acknowledges film’s growing role in the art world with this new exhibition held in conjunction with the University of Television and Film Munich. Eighty-eight documentary films made over the last ten years take centre stage.

From porcelain bowls to woolen hats; baby clothes to dirndls, the 110 vendors at this weekend’s extraordinary indie shopping event will surely have something for everyone on your list.