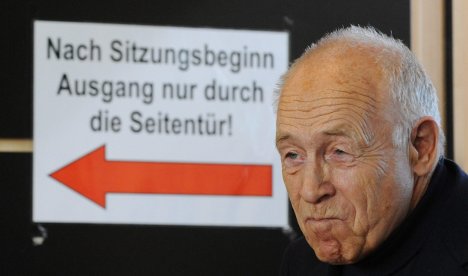 Following five weeks of deliberations between opponents and supporters in the capital of the southern German state of Baden-Württemberg, the two sides had found no compromise, he said.

Among other alterations, the €4-billion project plans to move Stuttgart’s main railway station underground and turn it round by 90 degrees. It also requires the construction of 57 new kilometres of railway track.

“Stuttgart has a building permit,” Geißler told the press, explaining that weak points of the project would be improved to create what he called a “Stuttgart 21 plus.”

Despite the environmental and budgetary concerns of its opponents, stopping the project would simply be too expensive, he said.

“An exit would create high costs for the groups responsible for the project,” he added.

But the two sides were able to reach a compromise over plans to clear trees from Stuttgart’s central Schlossgarten park. From now on builders would attempt to save as many trees as possible, or relocate them, he said.

The arbitration announcement – which is not binding – comes following months of sometimes violent protests in the normally staid southwestern German city. In one violent incident in September, police turned water cannon and pepper spray on a crowd that was blockading the Schlossgarten park, where 300 trees were due to be chopped down.

But the opposition Social Democrats (SPD) on Monday demanded a referendum on the project regardless of the outcome of the arbitration talks.

“It’s only fair if politicians allow the people to vote on such a controversial topic,” Sigmar Gabriel, SPD chairman, told reporters in Berlin.

Gabriel said if the Social Democrats came to power in state elections in Baden-Württemberg in March, the centre-left party would push for a referendum even in the knowledge scuppering Stuttgart 21 could cost up to €1 billion. Although the SPD had long backed the project, it could not be forced “with police batons,” he said.

Acknowledging that more protests were likely as construction continues, the 80-year-old Geißler said further talks between the two sides would be incrementally necessary, suggesting that church officials such as bishops take on the task of mediators.

Perhaps a sign of more strife to come, several Stuttgart 21 protestors chanted angrily outside the press conference after Geißler made his announcement.