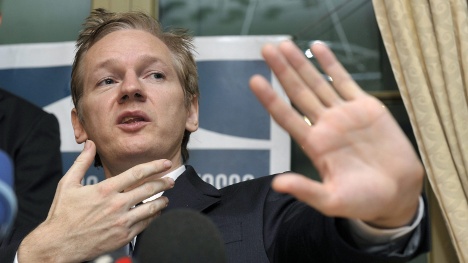 Few would dispute that the descriptions of German politicians revealed in American diplomats’ cables to Washington are embarrassing for US Ambassador Philip Murphy.

Among other things, they describe Chancellor Angela Merkel as uncreative and risk averse and Foreign Minister Guido Westerwelle inept and vain. But who is helped by leaking such information? Certainly not the image of the world’s most famous whistle-blower website, says transatlantic expert Riecke.

Is this going to damage German-US relations?

I don’t think so. In the long run it’s other factors that are responsible for German-US relations and the relationship is rather robust. It will cause personal frictions and some uneasiness on both sides and there will be a difficult period with lots of calls and niceties.

Personal relationships must be important, however, to get things done.

Yes, but I would not assume that the politicians that have been portrayed are extremely offended. When you look at the personal judgements of their qualities and the failings of the politicians, they are pretty sober. You could have taken most of these assessments from the daily newspapers.

You can also be sure that the German foreign services will be as open in its assessments of American politicians. The damage is not because of these evaluations. It’s on a different level. The fact that some intricacies and mechanisms of German foreign policy has been laid bare is of course more embarrassing.

Can you give some examples?

For instance, the tactics between the Foreign Ministry and the Defence Ministry before the Afghanistan conference in London this year, or the friction between the Free Democratic Party (FDP) and (Bavaria’s) Christian Social Union. These aren’t really secret, but to have it in such detail is of course a little embarrassing.

The challenge now is to make it clear to the media that it is not a case of, ‘The Americans are spying or evesdropping and we on the other hand are morally superior.’ That’s not how it is. The Americans are collecting data just as German diplomats. That’s how it works. This will be more difficult in the future.

So diplomats won’t be able to speak with the same confidence?

For a while. The US diplomats have lost much of the confidence of their partners. But the Americans reach out a lot. They are pretty helpful to many foreign policy actors and it’s more a mutual partnership.

What might foreign governments have learned about Germany’s internal processes that could be to Germany’s disadvantage, say on Afghanistan?

What’s been publicised is that the German Foreign Office was more reluctant to add forces to the Afghanistan ISAF mission. But this hasn’t been a secret. Nor have the tactics behind it: the FDP, one source said, tried to stop (Defence Minister Karl-Theodor) zu Guttenberg from travelling abroad saying the Germans should provide more troops – that’s not his core decision.

Will that cause difficulties within the German government, say between Guttenberg and Westerwelle?

I don’t think so. They know where they stand and who can expect what from whom.

Even Guttenberg telling US Ambassador Philip Murphy that Westerwelle, not the opposition Social Democrats, was the main obstacle to a troop rise?

I would assume that in their internal talks, the ambassador was aware of the differences. That was not really a secret and it wasn’t revealed only by Guttenberg in his talks with the ambassador.

But would it matter to Westerwelle that he now knows Guttenberg said that?

I don’t know how much of a problem that is. There are other things that are more important. If there is any controversy between the Foreign Office and the Ministry of Defence, they know where they stand.

What did you think of the actual assessments made of German politicians? Were they consistent with what people in your line of work hear?

Yes more or less. But it’s obvious some quotes (in the media) have been taken a bit out of context. Westerwelle’s initial speech to the German Council on Foreign Relations was not very impressive but if you read through (the leaked cables), you see that the Americans point out that he learned a lot and that he became savvier in foreign policy which is the normal for politicians everywhere.

Merkel could describe herself the same way as the Americans did: tough, persistent, avoids difficult or heated debates and perhaps is not really creative. These are not secrets.

So what is the value of the documents?

The question is, why did Wikileaks do this? Compared with the Iraq logs where they actually brought to light the brutalisation of human conduct in this war, actual war crimes that need to be punished in a state that obeys the rule of law, these (latest leaks) are kind of gossipy internal documents.

The most important signal that Wikileaks wanted to send is, ‘Hey, the superpower is vulnerable on the digital side.’

It’s a selfish way of going into combat with your enemy, the United States. This is damaging Wikileaks more than anything else.

So you saw value in the previous Wikileaks documents that you don’t see in this batch?

The question is, is there something a government has done wrong? If so, I have sympathy for the whistle-blower. If a government that is supposed to obey the law, and demands it of others, is committing war crimes, and does not pursue them rigorously, then this kind of whistle-blowing might be in order.

But if you have a complex war scenario such as in Afghanistan and you throw out hundreds of thousands of documents you’ve got from one actor such as the Department of State or Department of Defense, this does not at all mean you’re providing the context or balanced overview.

I’m not crazy about hundreds of thousands of documents thrown out. It’s too much for the regular consumer of the internet. If Der Spiegel hires 50 journalists to go through the material in four weeks, you can be sure those 50 journalists are not foreign policy experts. They look for the juicy stuff. That’s how it is.

Whistle-blowing is in order if there is a crime and it’s exposed, or if there is a harsh misrepresentation of what foreign policy looks like on the ground. But one shouldn’t simply throw out information just to show that a government is vulnerable.

How do you think governments are likely to react to this revelation that their conversations might no longer be guaranteed as private? Will there be a change in the way communications are made?

This has happened to the United States but everyone knows that this can happen to them as well. The damage is not so big that people will change completely the way of communicating.

But I would think the more secret stuff will be delivered in more traditional ways: verbally or in hard copy. It may be that more will be done in the back of a car in which you can trust the driver.