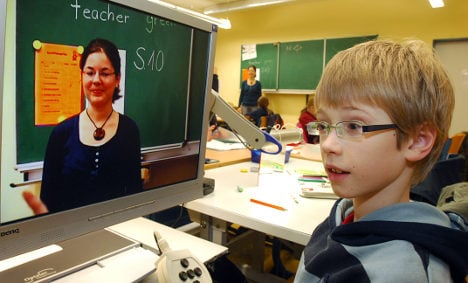 A visually impaired student at an integrated school in Lübeck. Photo: DPA

For many children with either physical or mental disabilities the opportunity to socialise with their peers ends with kindergarten because there aren’t enough suitable places for them in schools, the Bertelsmann Foundation found.

About 60 percent of special needs preschool children attend integrated facilities, but this number drops to 34 percent once they reach elementary school age, according to the research.

That number dips even lower to a national average of 15 percent for secondary school age kids with special needs, the study found.

The majority are forced to seek out separate special schools, it said.

“A consistent reorganisation in the direction of more inclusive schools is necessary,” Bertelsmann Foundation education expert Jörg Dräger said. “It can’t be that students with special needs learn together with other students until the end of elementary school and are then forced to attend separate special schools.”

Taking courses together is not just good for special needs students, he said, explaining that research has shown other “students’ performances don’t lapse and they improve their social competencies.”

The study showed major differences in progress between German states, though. In the northern state of Schleswig-Holstein more than 40 percent of special needs students were integrated into regular schools, but in Saxony-Anhalt, North Rhine-Westphalia and Hesse it was just 10 percent.

The Bertelsmann Foundation found that in 2009 there were some 480,000 students with special educations needs – about six percent of the country’s student population. Among these were 85,000 pre-school age children.

But each state defined their number of special needs differently, ranging from 4.5 percent of students in the state of Rhineland-Palatinate to 11.7 percent in Mecklenburg- Western Pomerania.

“The political goal in German is to cut the number of students who don’t graduate by half,” Dräger said. “That will only happen when we reform the special needs school system, because more than half of these students come from these schools. The necessary reorganisation means changes for all schools and costs money, but it will quickly pay off for our society.”