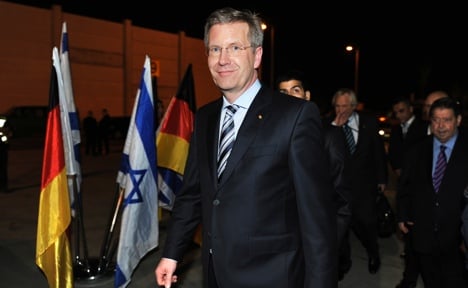 Wulff, 51, was elected in June and is Germany’s fifth president to pay an official visit to Israel.

His predecessor Horst Köhler in 2005 laid a wreath at Jerusalem’s Yad Vashem memorial to the six million Jews killed in the Nazi Holocaust and also addressed the Knesset, the Israeli parliament.

Wulff will also visit the Holocaust memorial during his trip. “In this official visit, I see a sign of our responsibility towards the existence of Israel and the very relationship between our two countries,” Wulff said in an official statement before leaving Germany.

He also linked responsibility towards Israel to “the fight against anti-Semitism.”

A quarter of a century ago, Richard von Weizsaecker became the first German president to visit Israel in 1985.

In March 2008, German Chancellor Angela Merkel visited 60 years after the Jewish state was founded in the wake of the Holocaust, also laying a wreath at Yad Vashem.

“The Holocaust fills us Germans with shame,” Merkel, the first German chancellor born after World War II, told the Knesset during her visit. “I bow before the victims, I bow before the survivors, and before all those who helped them so they could survive.”

Several Israeli lawmakers stayed away from the chamber, however, in protest at the chancellor speaking in German. The two countries set up full diplomatic relations in 1965 and Germany is now one of Israel’s closest partners in Europe.