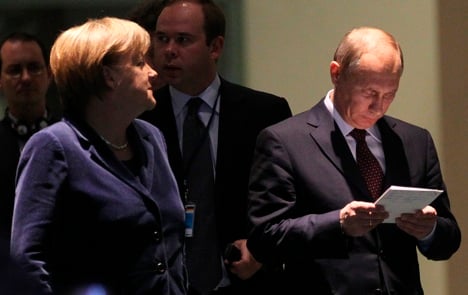 “A free trade zone is a complex, very complicated issue requiring thorough consideration,” Putin said after a visit to Germany during which he met Merkel as well as German business leaders.

A day earlier, Putin had suggested in a guest article for a German newspaper a bold idea of a vast free-trade zone from Vladivostok on Russia’s eastern edge to Lisbon in Portugal on Europe’s western extremity.

“In essence, we will get a continental market with a volume of trillions of euros,” Putin wrote in the Süddeutsche Zeitung.

Merkel, however, quickly made clear she was unimpressed with the idea, citing Russian tariffs and Moscow’s creation of a customs union with former Soviet republics Kazakhstan and Belarus.

“Of course we support the idea of a free trade zone between the EU and Russia but I have to pour a bit of cold water on it. The steps that Russia has taken recently do not point in that direction,” she said Thursday.

Merkel toned down her hostility after her talks with Putin, saying that such a zone would make sense, but stressing that it was something for the longer term.

“This is more of a question for the future. I basically share it (the aim). We are neighbours and just like in other areas we will intensify our partnership step by step,” Merkel said.

Putin too sought to stress that his relations with Merkel were warm, noting that the two leaders had hugged and kissed at the meeting. “We are good, old friends,” he said. “We do not have contradictions here … Here I fully agree (with Merkel).”

But he said that closer commercial ties between Europe and Russia were essential and inevitable.

“I do not know what form our cooperation should take – will it be a common free market or will it be our associated membership in the EU,” he said earlier.

“Can we assume that Russia together with Europe will one day be in a single currency zone? I can assume that.”

He also defended Russia’s customs union with Belarus and Kazakhstan, saying it was a considerable achievement and telling business leaders before meeting Merkel that it was “enormous, difficult hard work”.

“You have to urgently go to a store and buy us a bottle of schnapps because it was indeed a complicated, exhausting procedure,” he said.

Putin also said that good relations were a two-way street, complaining Europe was putting up barriers to Russian firms. “Sometimes it is difficult to (expand) … due to reasons that are completely unclear to us … One cannot work like this,” he said.

Putin voiced hope on Friday that Russia would complete its quest for World Trade Organization membership next year, an aim that Merkel said she supported. “I think this is possible and this our wish,” Putin said. “There are virtually no unresolved issues left.”

Russia, which opened its bid to join the WTO in 1993, is the last major world power not a member of the Geneva-based global trade body.

The United States endorsed in October Russia’s bid to join, and on Wednesday Russia said it had wrapped up a deal with the European Union that should enable membership next year.

“It is also desirable for us because of the G20, with Russia being a member of the G20. We would like finally to complete the Doha trade talks, and we would very much like to do this with Russia as a WTO member,” Merkel said.