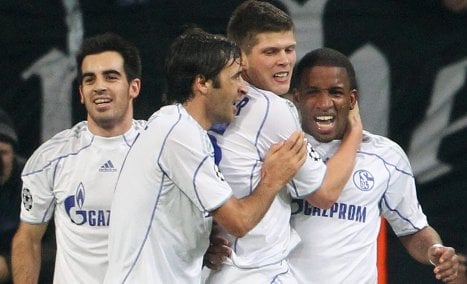 Although they are 15th in the Bundesliga, Schalke are now top of their group with three wins and 10 points ahead of their last game against Benfica on December 12.

“It’s a nice feeling, because for weeks we have been written off, but now we will play in the knockout stage,” said coach Felix Magath. “We played really well, especially in the first 30 minutes. This suggests that we have found our form again and now we need to re-focus on the Bundesliga.”

After his team beat Werder Bremen 4-0 in the Bundesliga last Saturday, Magath said his side look to have finally turned the corner after a disastrous start in the German league.

“The opening period (against Lyon) pleased me the most – we took control of the game from the start,” he said. “We have some stability now and the results speak for themselves that we are improving.”

Despite the defeat, Lyon will also go through to the last 16 as Benfica lost to Israeli side Hapoel Tel-Aviv in Israel and have a worse head-to-head record against the French side.

“The fact we have qualified is overshadowed by our performance,” said Lyon coach Claude Puel. “We were disappointing tonight and qualification does not hide our bad performance.”

Schalke took control of the game from the whistle and raced into a 2-0 lead after just 20 minutes thanks to goals by Jefferson Farfan and Klaas-Jan Huntelaar, before the Dutchman completed the rout with an 89th-minute goal.

The Royal Blues went ahead when a surge into the box by Spanish striker Raul – who scored a hat-trick in the hammering of Bremen – fed Farfan and the Peru star fired home from 12 yards out.

With the hosts attacking in waves, Huntelaar netted his 10th goal of the season for Schalke in all competitions since his transfer from AC Milan when he was fed on the edge of the area and rifled his shot in on 20 minutes.

Farfan was booked for diving over Lyon goalkeeper Hugo Lloris on 30 minutes as Schalke screamed for a penalty and Huntelaar fired over just before the half-time break.

Having already lost captain and central defender Cris for the trip to Gelsenkirchen with damaged knee ligaments, Lyon also look to have lost Yoann Gourcuff for a few weeks as the midfielder was stretchered off on 58 minutes.

Huntelaar added his second of the game in the dying stages when a long ball from the right flank found him in the penalty area and he held off two defenders before beating Lloris with a deflected shot.