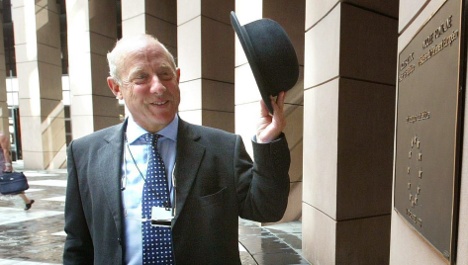 The phrase was a favourite Nazi-era slogan, and when Schulz complained, Bloom called him an “undemocratic fascist,” at which point parliamentary president Jerzy Buzek threw Bloom out of the chamber.

Bloom left his seat with a dismissive hand gesture and has refused to make a formal apology.

Schulz is the leader of the broad left Progressive Alliance of Socialists and Democrats, the second-largest bloc of MPs in the EU parliament. He had been calling for more solidarity in the eurozone and criticising what he called the “German-French management committee of Europe” in the recent agreement between Chancellor Angela Merkel and French President Nicholas Sarkozy to change the EU constitution.

The heads of five political groups, including the largest group in parliament, the conservative European People’s Party, urged Buzek to impose “a severe sanction” on Bloom.

“We can never accept that members of the European Parliament insult their colleagues in a way that recalls the worst hours of our history,” the leaders said in a statement.

The UKIP’s main policy is the withdrawal of Britain from the European Union. Bloom, the member for Yorkshire and the Humber, is himself no stranger to controversy. He was filmed at the 2009 United Nations Climate Change Conference in Copenhagen congratulating the French for bombing the Rainbow Warrior, a Greenpeace ship, in 1985, sparking outrage from the environmentalist group.

He has also made disparaging comments about women’s rights, once saying, “I just don’t think [women] clean behind the fridge enough,” and “I am here to represent Yorkshire women who always have dinner on the table when you get home.”