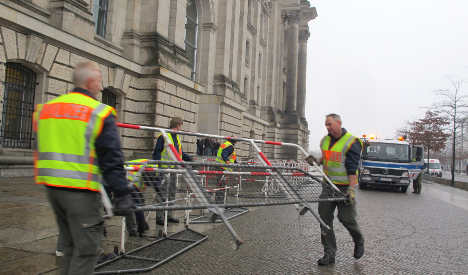 Extra security is erected around the Reichstag this week. Photo: DPA

Der Spiegel reported on Saturday morning that German security authorities had received information from an extremist who has been phoning the federal criminal police (BKA) over the last few days.

He supposedly wants to defect, and is therefore offering information about his jihadist colleagues’ plans. It was his information which prompted Federal Interior Minister Thomas de Maizière to publicly warn of a possible impending attack.

The caller, who is not in Germany, although Der Spiegel did not say where he is, said a terrorist commando of six people has already been formed, and that two of the men concerned went to Berlin at least six weeks ago.

Four more terrorists including a German, a Turk, and a North African, are allegedly waiting to come to Germany for the attack, which is planned for February or March.

The Interior Ministry received a second warning two weeks ago from the FBI, talking of a pact between the Indian Shiite group Saif and al-Qaida, which involved Saif sending two men to Germany to carry out an attack.

They are said to be expected to enter the United Arab Emirates on November 22, be furnished with new identity papers there and then come to Germany, travelling on visas for the Schengen area which they allegedly already have.

One of the men behind this plan to attack Germany is said to be Dawood Ibrahim, a man considered by the UN to be a supporter of terrorism, and one of those behind the 2008 attacks in Mumbai.

Der Spiegel said that this information was being taken very seriously by the FBI and the BKA, but that the CIA and German intelligence, the BND, as well as the German Office to Protect the Constitution, were more sceptical about it.